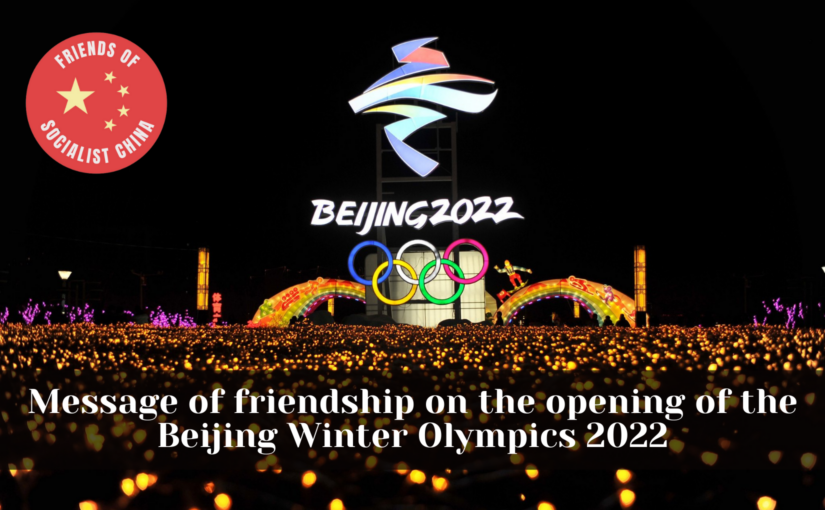 Embedded below is a friendship message from Friends of Socialist China, delivered by our co-editor Carlos Martinez, on the Beijing Winter Olympics 2022. The transcript follows the video, and has been translated into Dutch by our friends at ChinaSquare.be

On behalf of Friends of Socialist China, I’d like to express our support for, and confidence in, the Beijing Winter Olympics 2022.

We believe that these Games constitute an important milestone on the road to a multipolar world.

A handful of imperialist countries have tried to instigate a so-called diplomatic boycott, concocting vicious and ridiculous slanders about human rights abuses in Xinjiang.

People around the world have commented on the chilling irony of countries such as the US and Britain – with their record of genocidal wars fought against the Muslim world, and with their longstanding problems of Islamophobic racism – suddenly positioning themselves as the defenders of Muslim human rights.

Meanwhile the attempts to disrupt the games and slander China have been an outright failure. Over 30 heads of state and government will be attending the opening ceremony in Beijing. Not one country in Africa, Latin America or the Middle East supported the boycott. Not a single Muslim-majority country has supported the boycott.

The failed boycott campaign is an important demonstration that the world is becoming more multipolar by the day; that hegemony and unipolarity belong in the past; that the US and its allies can no longer impose their will on the rest of the world; that the peoples of the world value their friendship and cooperation with China, which is an indispensable force in the construction of a democratic and peaceful system of international relations with the United Nations and international law at its centre.

The Games are also a reminder of how seriously China is taking the global struggle against climate breakdown. The Beijing Winter Olympics will be the greenest Olympics in history and the first to exclusively power all venues with clean, renewable energy. 85 percent of vehicles used for the Games will run on either electricity or hydrogen.

Five of the seven venues are legacy venues that were built for the 2008 Olympics. And over the last few years, Beijing has ramped up its afforestation campaign: the city’s tree coverage is now 44 percent, double the level of London or New York City.

And then there’s the pandemic control protocols that have been put in place to ensure that the participants are completely safe and not at risk from being infected with Covid-19.

These measures serve to remind us that China has done everything possible to protect its population from the pandemic over the course of the last two years. Over a year has passed since the last death from Covid in mainland China. Since successfully containing the outbreak in Hubei in the first few months of 2020, there have been only a small handful of Covid deaths – a truly remarkable achievement for a country of 1.4 billion people.

Due to China’s dynamic Zero Covid strategy, the vast majority of the population have been able to live their normal lives throughout this period. The few small outbreaks have been quickly contained. Meanwhile economic growth has recovered and the projects of poverty alleviation, infrastructure development and improving people’s lives continue.

Meanwhile the US and Britain – two of the world’s wealthiest countries – have over a million Covid deaths between them.

Socialist China’s management of the pandemic has shown it to be a world leader in public health, and has shown its government to be exceptionally competent, effective and responsive to the needs of the people.

And finally, the smooth running and efficiency of the Games remind us that China has left poverty and backwardness behind. When the People’s Republic of China was founded in 1949, China was among the world’s poorest countries, with a life expectancy of 35, a literacy rate of perhaps 10 percent, and precious little infrastructure, having suffered a hundred years of colonial domination, war and chaos.

Now it is an advanced modern country, a leader in several key areas of science and technology, with an excellent education system and an increasingly prosperous population. It has eliminated extreme poverty and ended famine. Every single person enjoys the right to adequate food, shelter, clothing, education and healthcare. And China’s rise has been peaceful, not based on domination or hegemonism. It enjoys excellent, friendly and mutually beneficial relations with most countries in the world. That friendship is reflected in these Winter Olympics.

So again, our greetings and respect to the organisers and participants, and to the Chinese people and the Communist Party of China. We wish you every success.