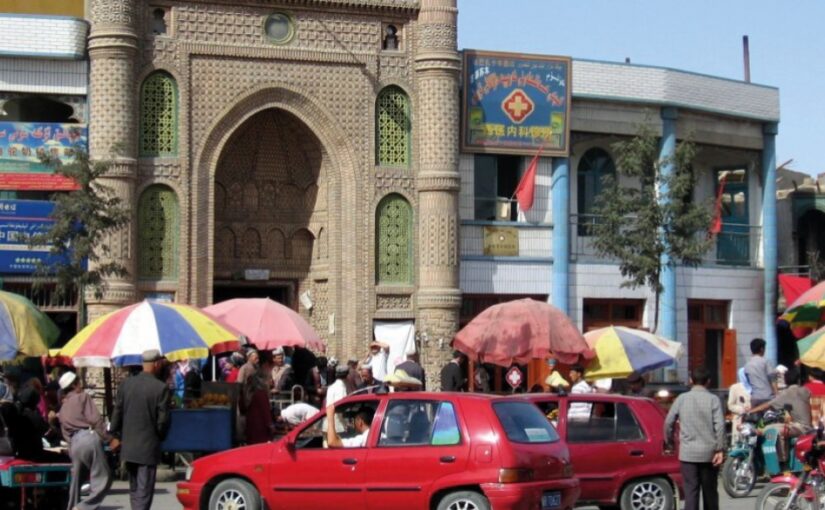 We are pleased to republish this article by Dr Jenny Clegg, academic, author and veteran activist, originally published in the Morning Star. Jenny dissects the latest report on the situation in Xinjiang from the Australian Strategic Policy Institute (ASPI), whose funding by the US State Department, NATO, the British and Japanese governments, arms manufacturers and other dubious sources, utterly refutes its specious claim to be an “independent, non-partisan think tank”, with help from detailed analysis by CoWestPro Consultancy, which is also Australia-based. Jenny also advances the view that problems and shortcomings in China have to be viewed against its background as a developing country.

THE issue of Uighur forced labour is held up as a particularly pernicious abuse of human rights in China.

Prominent here has been the Australian Strategic Policy Institute (Aspi) 2020 report, Uyghurs For Sale, claiming that the Chinese government is orchestrating a forced Uighur labour programme.

Aspi counts the US Department of State, Nato, and a number of arms dealers among its largest donors — why an organisation oriented towards strategy and defence should take up the issue of forced labour is anybody’s guess.

Be that as it may, Aspi’s report has been used to support recent US legislation to ban goods made by Uighur labour. Now, with cries of “slave labour” from the likes of Tom Tugendhat leading the way, Britain may well follow suit with a similar Bill this year.

However Aspi’s charges have been brought into question by Jaq James, an independent international law advocate from the recently established Australia-based CoWestPro Consultancy, who subjects the allegations to a forensic legal-based examination.

Uyghurs For Sale draws on six case studies of factories employing Uighurs outside Xinjiang in other provinces, China’s practice of pairing less developed with wealthier provinces to aid development setting the context.

In fact, the policy is China’s way of upholding the UN’s right to work. At any rate, migration is a normal part of development: in China, there are some 300 million migrant workers.

Aspi’s allegations centre on applying the International Labour Organisation’s (ILO) 11 indicators for forced labour, but, as James points out, these are simply a guide to identifying possible signs of abuse for further investigation and do not amount to a legal definition, something Aspi fails to make sufficiently clear.

In many cases, James finds Aspi’s concerns to not fit well with the ILO criteria and where there appears to be a match, the Aspi case crumbles through bias, mistranslation of government documents, and sloppy methodology relying on hearsay and journalist testimony.

For example, Aspi says the existence of razor wire around the factories indicates restriction of movement.

But this of course is common practice around the world, not to keep workers in but to keep others out to protect expensive equipment: why should China be any different?

Some of the factories were found to be running night schools with classes for the young Uighur workers in Mandarin, vocational training and “patriotic education,” this covering policies and regulations as well as encouraging support for the Communist Party and government.

Aspi seems to view all these as forms of “cultural genocide” but as CoWestPro points out there is no legally defined such crime, nor any evidence presented by Aspi that these classes were damaging to Uighur self- or national identify.

Take the slogan “Tell stories of poverty alleviation; show deep gratitude to the party” — is this patriotic education or political indoctrination?

Again, Aspi takes issue with the naming of one night school, “Pomegranate Seed” referencing a Xi Jinping quote supposedly saying “every ethnic group must tightly bind together like the seeds of a pomegranate.”

And what about the somewhat alarming “psychological dredging” office run by the local women’s federation at one of the factories?

For Aspi this is evidence of “monitoring of the Uyghur workers’ ‘ideological trends’ and ‘thoughts’ for the purposes of political indoctrination” evidently of such intensity as to violate human rights.

More accurately translated, this turns out to be a counselling office, a service provided by many large businesses and institutions around the world for their employees.

Then there is the case of the factory with an “emergency response action plan” run jointly by the management and the local government setting up a daily reporting system which explicitly says this is to control the “ideological trends of Xinjiang workers.”

As CoWestPro clarifies, the plan references an incident of rioting in Xinjiang in 2009 — a reaction to a violent clash between Han and Uighur workers in Guangdong which saw at least two Uighur workers killed and 118 people injured. The riots then resulted in 197 deaths and more than 1,700 people injured.

Seen in context, the plan was not so much about coercion or indoctrination but more a proactive step to prevent another such ethnic conflict and ensure the human right of safety at work.

As CoWestPro says: “If Aspi had a better solution to deal with ethnic tensions in the workplace, it should have said so.”

The plan also lists workplace facilities — the provision of a library, recreation room, sports facilities, video chatrooms, traditional Uighur halal meals — all of which Aspi fails to report, and, contrary to Aspi’s allegation that religious practices (unspecified) were banned, the celebration of Islamic festivals was also mentioned.

Of the 18 concerns raised by Aspi none were found by CoWestPro to survive close scrutiny.

The lead author of Uyghurs For Sale has even herself apparently acknowledged that “without adequate auditing access, it remains difficult to determine whether a factory [in China] uses forced labour or not.”

But despite domestic laws in China against it, forced labour does persist and not just among the Uighurs.

A developing country still, China really has a long way to go to improve working conditions and its legal infrastructure is in urgent need of modernisation.

Even where national laws are progressive, their application can be poor — through incompetence, ignorance as well as downright corruption at local levels.

However Aspi sees forced labour in essentially substandard working conditions and even innocuous daily doings such as taking showers or learning Mandarin.

The CoWestPro critique reveals the pitfalls in Western reporting on human rights abuses in China as mistranslation and failure to take account of context feed nebulous ideas of “cultural genocide”: “cadres” become “minders”; the “modern outlook” that young Uighur workers may gain as they mingle with people of different ethnicities in and out of the workplace becomes “ideological indoctrination.”

British practice keeps politics out of the workplace, but is it a violation of human rights for the Chinese Communist Party to call on the Chinese workers, including Uighurs, to express gratitude for their successes in alleviating poverty, tackling Covid, maintaining steady economic and social progress?

The CoWestPro paper is not intended as a whitewash — at least some of the allegations warrant further investigation — but what it does do is to present a convincing exposure of the Aspi report, with its sensationalising and twisting of facts, as a deliberate piece of disinformation designed to demonise the Chinese government and damage its reputation on the world stage.

The Aspi report in fact may well have brought the Uighurs significant economic hardship as the naming of suppliers has likely contributed to a loss of jobs.

Efforts to alleviate their poverty may have been set back by disruption of government worker training programmes, which incidentally all governments are required by the UN to provide, especially for young people, women, the disadvantaged and the marginalised.

The CoWestPro paper — and the issues it raises — deserves serious consideration within the labour movement: should the UN and ILO conventions be taken as setting a one-size-fits-all workplace standard or as a guide with room for flexibility in practice to accommodate differences of cultural and national conditions?

Rather than rushing to support bans and sanctions, better to offer advice on improving the labour and anti-discrimination laws and support China’s sustainable development in line now with its 14th five-year plan.