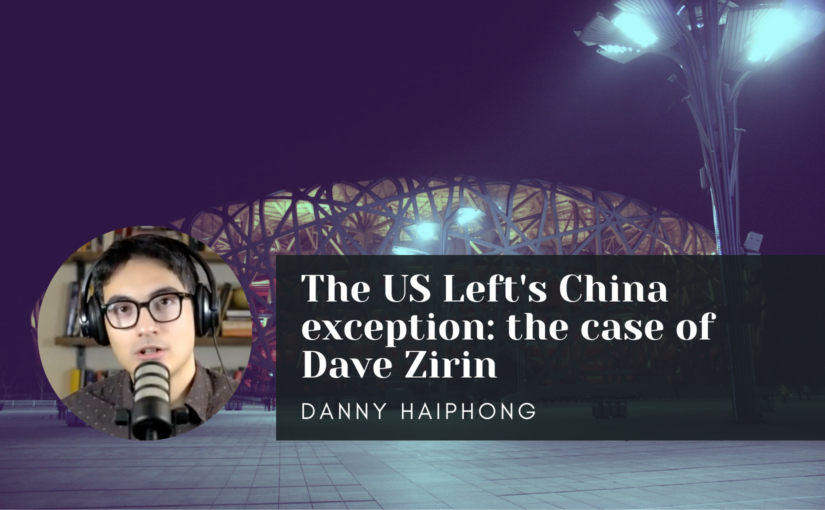 We are very pleased to publish this important article by our co-editor Danny Haiphong, originally published on The Chronicles of Haiphong. Using the Beijing Winter Olympics as his starting point, Danny outlines how even some of the most respected voices on the American left have a tendency to drop their progressive values when it comes to China. Danny identifies this as the China Exception. Whilst doubtless a play on the concept of American Exceptionalism, the phenomenon identified and analysed by Danny can also be seen in other imperialist countries, not least in Britain.

I like Dave Zirin. I really do. Zirin is one of the few journalists who analyzes sports from a leftists perspective. His work generally brings a refreshing take on the ways race and class impact one of the most widely consumed areas of popular culture. This article is not a polemic of Zirin’s body of work but rather a demonstration of a troubling trend.

With that said, Zirin and his colleague Jules Boykoff at The Nation have repeatedly demonstrated what I call the China Exception on the American Left. The China Exception is the tendency for even principled left activists and journalists to make critical concessions to the U.S. establishment on the question of China. Those who commit to the China Exception repeat the subtle yet dangerous aspects of the U.S.’s New Cold War propaganda while claiming to be opposed to a “hot war” with China. The conclusion is always that is bad and doesn’t deserve solidarity from the American Left—not even in the form of concrete opposition to U.S. aggression.

Zirin and Boykoff first applied the China Exception rule to their coverage of the Chinese tennis player Peng Shuai at the end of last year. They penned two articles that regurgitated sensationalist corporate media talking points without any further investigation.

I also wrote about another key example of the China Exception in The Nation magazine, this time written by David Klion. Klion painted leftists opposed to the New Cold War with a broadly negative brush and elevated voices like Bernie Sanders’ foreign policy advisor Matt Duss who openly endorsed an act of war, economic sanctions, against China. So-called human rights violations were the sole measure of leftist politics and zero attention in the article was given to the U.S.’s aggressive policies toward China.

At first glance, Zirin and Boykoff’s’ most recent take on China and the Winter Olympics is less hostile than the typical anti-China screed. The authors make fair points about the bipartisan attack on Eileen Gu and the role of the mainstream media such as NBC’s coverage of the Beijing 2022 Winter Olympics in fueling anti-Asian racism. They rightfully conclude that accusing China of “sports washing” is hypocritical given the massive profits that NBC is set to accumulate over the next two decades of monopolized Olympic coverage.

Still, Zirin and Boykoff fall into the China Exception trap in several important areas. First, the authors claim that politics on China in the U.S. are driven by “campism.” Either you are anti-China or you are pro-China. Zirin and Boykoff state that “for some,” the concern about China and the Olympics transcends the two camps and isn’t centered on anti-China sentiment.

However, Zirin and Boykoff fail to specify who exactly makes up the “some” in their analysis. We are just supposed to believe that non-“campist” leftists exist and are primarily concerned about building solidarity with oppressed groups in China. The only citation provided to readers is an Al Jazeeraarticle covering the Uyghur Tribunal, a U.K. based mock trial organized by a consortium of U.S.-backed human rights organizations that alleges a genocide has taken place in China’s Western province of Xinjiang.

The Uyghur Tribunal’s principal sponsor is the World Uyghur Congress (WOC). The World Uyghur Congress is heavily financed by the National Endowment for Democracy, a CIA-spin off which receives millions in Congressional funds to fuel unrest in nations targeted for regime change around the world. The WOC received more than $400,000 from the NED in 2020 alone.

Statements at the Uyghur Tribunal were taken from far right “scholar” for the Victims of Communism Memorial Foundation, Adrian Zenz, and Wang Leizhan, an alleged former police officer in Xinjiang Uyghur Autonomous region who changed his name for a CNN interview four months later to further spread inflammatory and unverifiable stories of human rights abuses.

None of these inconsistencies appear in Zirin and Boykoff ‘s article. Instead, NBC anchor Mike Tirico is said to have spoken “inconvenient truths.” NBC is credited with addressing the “human-rights elephant in the room.” The authors then pivot to say that this is hardly a “brave” act given the widespread “pyre” of anti-China sentiment in the United States. Tirico and NBC may be correct in pointing out China’s alleged human rights abuses, but they aren’t brave for doing so.

This unnecessary and simply false concession to imperialism aligns with the China Exception thesis. The number one job of a journalist is not to repeat mainstream media narratives but to thoroughly investigate the truth behind them. It isn’t “campism” to acknowledge that claims of “genocide” in China’s Xinjiang Uyghur Autonomous Region are dubious at best and outright lies at worst. The problems with the claims go far beyond biased sources such as the World Uyghur Congress which have been linked to the U.S. national security state.

Whatever one thinks of China’s policy in Xinjiang, it can hardly be considered a genocide. The Uyghur population has increased by more than a quarter since 2010. Life expectancy has more than doubled since 1949. Many social indicators for Uyghurs are similar to that of the general population in mainland China. Extreme poverty was eliminated in Xinjiang in November 2020.

That Zirin and Boykoff claim Tirico spoke “inconvenient truths” when no such thing occurred is a byproduct of the China Exception mentality. Adherents of the China Exception generally dismiss or conveniently omit the political agenda behind U.S. claims of human rights abuses in China. However, the agenda is not difficult to discern. The U.S. has made a number of aggressive policy maneuvers based on dubious claims of Chinese wrongdoing in Xinjiang Uyghur Autonomous Region. This includes economic sanctions on China’s solar industry and the newly passed Uyghur Forced Labor Prevention Act, a virtual blockade on all imports from the region.

The term “campism” is a euphemism for the slogan, “neither Washington nor Beijing.” This slogan is widely accepted among the American Left and is a critical feature of the China Exception. Zirin and Boykoff assert that the condition of Chinese workers, women, and ethnic minorities is reason enough not to stand with China’s government. They forget, as many American Leftists do, that the conditions of the Chinese people are for the Chinese people to resolve. The concept of self-determination is rejected entirely, which helps explain why neither Zirin, Boykoff, nor The Nation has yet to take a firm stance against U.S. imperialist aggression toward China.

Zirin and Boykoff’s article leaves readers with more questions than answers. Here are mine: is it “campism” to give attention to the fact that Western studies have found China’s government possess a public satisfaction rating above 90 percent? Is it “campism” to acknowledge China’s successful poverty alleviation program and COVID-19 response? Is it “campism” to conclude that China’s geopolitical influence is defined by cooperation and solidarity? After all, China exports COVID-19 vaccines and infrastructure development instead of the U.S. trademark of bombs and sanctions.

“Neither Washington nor Beijing” is a clear expression of the U.S.-led New Cold War. The slogan simply doesn’t apply to any other context. Would Zirin and company make a false equivalency between the Palestinian resistance and the Israeli settler state? Or the United States and Afghanistan? The answer is no. The China Exception and its “Neither Washington nor Beijing” slogan assume that China’s growing economic and political influence makes it an equally villainous player on the world stage. Solidarity is thus only warranted when those on the receiving end are weak and in no position to threaten U.S. hegemony.

The best way for progressives and Leftists to express solidarity with the Chinese people is by respecting their sovereignty. This requires shifting political analysis away from sensationalist and dubious human rights claims to the verifiable imperialist aggression waged by the United States against China in the Asia Pacific. Maybe Zirin and Boykoff will heed the call and reverse course. However, given their recent work, this seems unlikely. It is therefore imperative that we confront the China Exception tendency by placing the requisite pressure on the American Left to stand on the right side of history.

One thought on “The US Left’s China exception: the case of Dave Zirin”