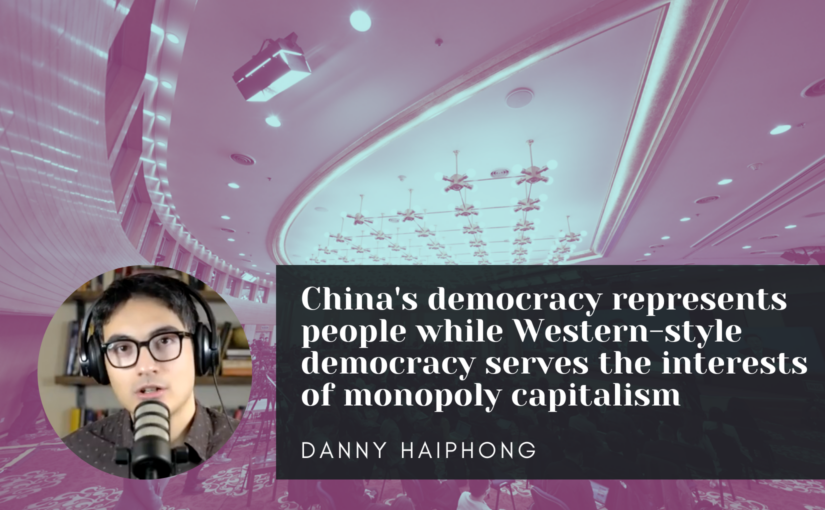 This interview with Friends of Socialist China co-editor Danny Haiphong was published in Global Times on 7 March 2022. Global Times reporter Yu Jincui asks Danny’s opinion regarding the 2022 ‘Two Sessions’, the evolution of China’s whole-process people’s democracy, the comparison between Chinese and Western democracy, and the motivation for setting up Friends of Socialist China.

GT: What’s your expectation for the Two Sessions this year and how do you view its significance concerning China’s future development?

Haiphong: China is holding the two sessions in a moment of unprecedented global crisis. The resurgence of COVID-19 due to the Omicron variant has dampened the economic forecast in China and the ongoing Russia-Ukraine conflict has certainly raised questions about the future of international stability and China’s role in helping secure it.

Despite the gravity of these developments, China will use the two sessions to begin discussions on a number of policies that embody the spirit and mission  of the 14th Five-Year plan. At the top of the agenda is the dual management of COVID-19 and economic growth targets. Issues and policies relating to China’s goal of achieving “common prosperity” on the road to fully building a modern socialist country by 2050 will undoubtedly be the subject of deliberations at the two sessions.

My expectation is that the two sessions will reaffirm China’s capacity to lead by example through whole-process democracy. China is the only world power at the moment in a position to chart a development plan that meets the interests of the people for a better life. Through direct consultation and participation of grassroots deputies representing all levels of society, China possesses a mechanism in the two sessions which can chart a clear path toward meeting concrete development goals.

GT: How do you understand whole-process people’s democracy? Compared with Western-style democracy, what do you think is the biggest difference?

GT: Over 5,000 deputies of the National People’s Congress (NPC) and members of the Chinese People’s Political Consultative Conference are gathering in Beijing. They come from all walks of life across the country. How do you see the difference between Chinese lawmakers and American lawmakers? A view holds that US lawmakers are more adept at playing electoral politics rather than solving real problems facing the country. How do you view this?

Haiphong: US lawmakers are generally selected by wealthy elites first and elected by the people second. The majority of representatives in the US Congress are millionaires who accumulated their wealth through satisfying the interests of monopoly corporations and private financial institutions.

House Speaker Nancy Pelosi, for example, has achieved a net worth of about $100 million during her more than 30-year career in Congress. US lawmakers and their staff often move from government positions to the corporate boardrooms of their donors and lobbyists. Several former aides to Democratic Party Senator Joe Manchin currently work for energy lobbies that played a key role in stymying increased investment in infrastructure and renewable energy development.

The immense influence of private wealth over the political careers and policies of US lawmakers incentivizes procedure over solving real problems that impact the lives of the impoverished and oppressed. Unlike China, where the government is structured to enact people-centered development plans, the US governance system is designed to reproduce policies that reinforce the status quo. This explains why despite rhetorical differences on certain issues, Democrats and Republicans from Joe Biden and Donald Trump to members of Congress often carry out a similar policy framework of increased war spending, subsidies for the wealthiest corporations, and austerity measures that negatively impact the livelihoods of ordinary people.

Another stark difference between lawmakers in the US and China is their social character. Poor workers in the US generally do not have the means or wealth to compete in elections that require massive financial expenditures to run successful campaigns. Furthermore, the interests of ethnic and racial minorities are only given attention when social conditions, such as the Black Lives Matter protests, demand it. It’s clear, however, that Joe Biden’s key role in writing legislation that led to an enormous rise in the African-American prison population and his support of militarizing police departments that exacerbate racial tensions indicate that the interests of racial minorities are treated as an afterthought.

In China, ethnic minorities are not only provided representation at the highest levels of governance but their economic, cultural, and political interests also find expression in policy discussion and implementation. Furthermore, wealth is not a determinant of political participation. Lawmakers come from all walks of life and are judged by their service to the village, municipality, province, and the nation at large.

GT: China insists that countries with different political systems can coexist, and it emphasizes win-win results in the development process. However, the US and some Western countries want to divide the world into democracy vs autocracy. What risks and consequences will this bring to the world?

Haiphong: Viewing the world from the prism of “democracy” and “autocracy” is indicative of a new Cold War mentality. The US describes China, Russia, and a select number of countries as “autocratic” to justify its policy of unipolar aggression. The label “autocracy” comes with an equally aggressive propaganda campaign that influences public opinion to support war. Furthermore, Americans and citizens of the West are taught to blame their problems on a foreign “adversary.” Major threats to humanity such as war, climate change, and poverty become increasingly difficult to address when so-called “democracies” in the West pursue narrow self-interests and divide the world instead of win-win cooperation. This is the true character of Western-style “democracy:” endless militarism and domestic policies that favor a small, wealthy minority of the population.

Haiphong: Friends of Socialist China was conceived by myself and colleagues of mine amid great dissatisfaction with the low level of solidarity with China that exists even among the most progressive-minded journalists and activists in the West.

It is important to us that the New Cold War being led by the US is challenged not just on the basis of its irrationality and negative consequences for humanity, but also from the standpoint of an endless stream of misinformation about China.

Much of the propaganda spread by Western media is based on a Cold War understanding of China that negates the important achievements of socialism with Chinese characteristics in the modern era. This is a great disservice to people in the West. People in the West are denied the right to learn from China’s successes in poverty alleviation, renewable energy, high-technology, COVID-19 containment, infrastructure development and more. We hope to change that in the interest of peace. People in the West need to know the real China if they are to develop the empathy and solidarity required in the development of world peace.

The biggest impediment to this work is the highly concentrated private media in the West and how it acts as a lever of misinformation for US-led cold war policies. Public opinion on China has declined significantly, and anti-China propaganda has led to a spike in racist incidents toward Chinese and people of Asian descent in the US and the West. All of this creates inevitable hostilities to our work, but we have also seen an increasing number of people take interest in China and want to do their part to reverse these troubling trends.

GT: Under the crisis of capitalism and democracy in the US, what changes have occurred in the attitudes of young Americans toward socialism? Is socialism becoming more attractive?

Haiphong: Rampant inequality and dim prospects for the future have indeed increased interest in socialism in the US, especially for young Americans under the age of 35.

This is a massive shift in the post-Cold War status quo in the US which argued that the world had entered the “end of history”, meaning capitalism would forever remain hegemonic. The collapse of the Soviet Union paved the way for an unprecedented expansion of US aggression and wars on Yugoslavia, Afghanistan, Iraq, and several others. Finance capital also found ample room to expand to the point where it became “too big to fail” after causing the biggest global economic crisis since the Great Depression in 2007-08.

Amid increased spending for war and decreased spending on social needs, young Americans have become frustrated with low wages, diminished job prospects, high costs of living, blatant racial injustices, and the hypocrisy of political officials spending enormous resources on massive defense budgets, fossil fuel subsidies, and stimulus packages for the wealthiest financial institutions responsible for their problems. Young Americans desire a kind of “common prosperity” that takes their interests into account. They believe that socialism is worth exploring as a possible way forward. However, the debate over what socialism would look like in the US remains unresolved. We at Friends of Socialist China understand that while China’s model of socialism cannot be exported to the US, its commitment to improving the lives of the people certainly deserves more attention.