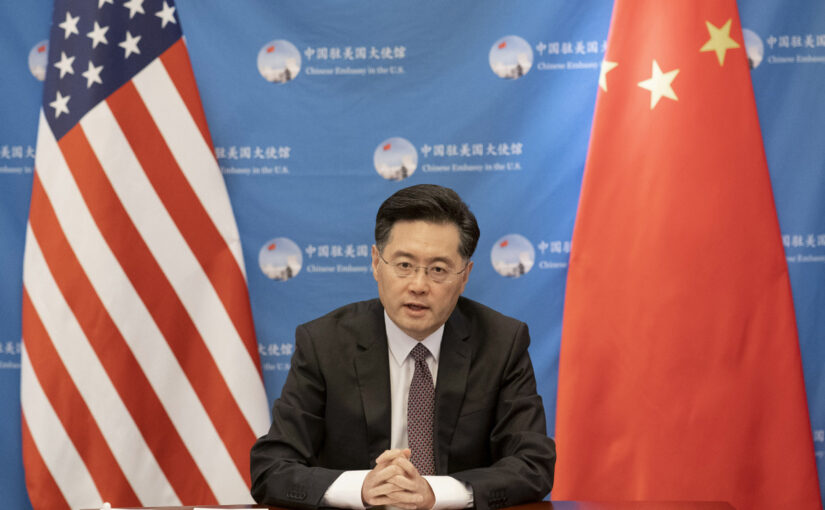 In this important article, originally published as an op-ed piece in the Washington Post, Qin Gang, China’s Ambassador to the US and one of his country’s most skilled and experienced diplomats, sets out Beijing’s principled position on the conflict between Russia and Ukraine for the American public and refutes a number of misconceptions being spread in that regard. Most importantly, he makes it crystal clear that:

Assertions that China knew about, acquiesced to or tacitly supported this war are purely disinformation. All these claims serve only the purpose of shifting blame to and slinging mud at China. There were more than 6,000 Chinese citizens in Ukraine. China is the biggest trading partner of both Russia and Ukraine, and the largest importer of crude oil and natural gas in the world. Conflict between Russia and Ukraine does no good for China. Had China known about the imminent crisis, we would have tried our best to prevent it.

Many Americans are understandably trying to understand where China stands as the crisis in Ukraine unfolds, so I want to take this opportunity to explain fully and dispel any misunderstandings and rumors.

There have been claims that China had prior knowledge of Russia’s military action and demanded Russia delay it until the Winter Olympics concluded. Recent rumors further claimed that Russia was seeking military assistance from China. Let me say this responsibly: Assertions that China knew about, acquiesced to or tacitly supported this war are purely disinformation. All these claims serve only the purpose of shifting blame to and slinging mud at China. There were more than 6,000 Chinese citizens in Ukraine. China is the biggest trading partner of both Russia and Ukraine, and the largest importer of crude oil and natural gas in the world. Conflict between Russia and Ukraine does no good for China. Had China known about the imminent crisis, we would have tried our best to prevent it.

China is committed to an independent foreign policy of peace. As a staunch champion of justice, China decides its position on the basis of the merits of the issue. On Ukraine, China’s position is objective and impartial: The purposes and principles of the U.N. Charter must be fully observed; the sovereignty and territorial integrity of all countries, including Ukraine, must be respected; the legitimate security concerns of all countries must be taken seriously; and all efforts that are conducive to the peaceful settlement of the crisis must be supported.

Given this, threats against Chinese entities and businesses, as uttered by some U.S. officials, are unacceptable. Neither war nor sanctions can deliver peace. Wielding the baton of sanctions at Chinese companies while seeking China’s support and cooperation simply won’t work.

Some people are linking Taiwan and Ukraine to play up the risks of a conflict in the Taiwan Strait. This is a mistake. These are totally different things. Ukraine is a sovereign state, while Taiwan is an inseparable part of China’s territory. The Taiwan question is a Chinese internal affair. It does not make sense for people to emphasize the principle of sovereignty on Ukraine while hurting China’s sovereignty and territorial integrity on Taiwan. The future of Taiwan lies in peaceful development of cross-Strait relations and the reunification of China. We are committed to peaceful reunification, but we also retain all options to curb “Taiwan independence.” We hope the United States earnestly abides by the one-China principle and does not support “Taiwan independence” separatism in any form. To ensure long-term peace and stability across the Taiwan Strait, China and the United States must work together to contain “Taiwan independence.”

In Ukraine, China has made huge efforts to push for peace talks and the prevention of a humanitarian crisis. In a phone call with President Vladimir Putin on the second day of the conflict, President Xi Jinping expressed China’s desire to see Russia and Ukraine hold peace talks as early as possible and received a positive response. When virtually meeting with leaders of France and Germany, Xi emphasized the need to jointly support peace talks between Russia and Ukraine.

Yang Jiechi, the director of the Office of the Central Commission for Foreign Affairs, just met with national security adviser Jake Sullivan in Rome, and State Councilor Wang Yi has also maintained close communication with Secretary of State Antony Blinken and other foreign ministers, exchanging views on the Ukraine crisis. China has also outlined a six-point initiative that calls for making sure that humanitarian operations abide by the principles of neutrality and impartiality; gives full attention to the displaced persons in and from Ukraine; ensures the protection of civilians; provides for safe and smooth humanitarian aid activities; provides for the safety of foreign nationals in Ukraine; and supports the United Nations’ coordinating role in channeling humanitarian aid, as well as the work of the U.N. crisis coordinator for Ukraine. The first tranche of emergency humanitarian supplies provided by the Red Cross Society of China to its Ukrainian counterpart has been shipped from Beijing.

As a Chinese proverb goes, it takes more than one cold day to freeze three feet of ice. The long-term peace and stability of Europe relies on the principle of indivisible security. There must be a balanced, effective and sustainable European security architecture. The priority now is to achieve a cease-fire to protect civilians from war. But as a permanent member of the U.N. Security Council and a responsible major country, China will continue to coordinate real efforts to achieve lasting peace. We stand ready to do whatever we can and work with other parties. Our ultimate purpose is the end of war and support regional and global stability.

One thought on “Ambassador Qin Gang: Where China stands regarding Ukraine”