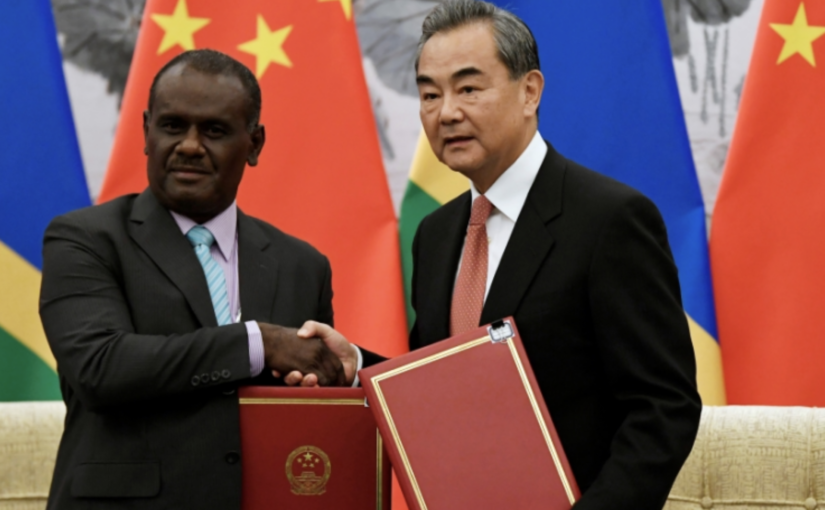 We are pleased to republish this insightful article from The Socialist Correspondent about the recent imperialist hysteria surrounding the Solomon Islands’ security agreement with China. The author contextualises this manufactured crisis within the escalating US-led New Cold War and the longstanding project to encircle and contain the People’s Republic of China and to roll back the Chinese Revolution. The article goes on to note that the West’s attempts to keep the island nations of the Pacific within its ‘sphere of influence’, plus the Biden administration’s undermining of the One China principle, pose a significant danger to world peace.

The Solomon Islands nation in the Pacific – 2000 kilometres north-east of Australia – has dared to assert its own independent foreign policy after decades spent under foreign tutelage. Prime Minister Manasseh Sogavare hailed an agreement between his country and China – including a security pact – as a “milestone”. He said: “We need to diversify the country’s relationship with other partners. What is wrong with that?” China was not pressuring his country into signing the pact, he insisted, adding that “the Solomon Islands themselves requested the treaty.”

The USA and Australia are nevertheless threatening military intervention to prevent the deal from being enacted.

The issue is a potential Chinese military presence in the Solomons – under an agreement that would allow Chinese ships to visit and “carry out logistical replenishment” and allow Chinese police to assist in “maintaining social order” in the country.

“We have respect for Solomon Islands’ sovereignty, but…”

Even though Sogavare assured the West that there would be no Chinese military base on the Solomon Islands, Daniel Kritenbrink, the chief US diplomat for East Asia and the Pacific, made this veiled threat: “Of course, we have respect for the Solomon Islands sovereignty, but we also wanted to let them know that if steps were taken to establish a de facto permanent military presence, power projection capabilities, or a military installation, then we would have significant concerns, and we would very naturally respond to those concerns” (Guardian, 26 April).

Australia has warned that any Chinese base on the Solomons would represent a “red line”. The new Labor prime minister Anthony Albanese and his foreign minister Penny Wong accused the previous government of committing “the worst Australian policy failure since the second world war” (Guardian, May 23) in allowing the Solomon Islands’ deal with China. Media oligarch David Llewellyn-Smith (Macrobusiness, March 25, 2022) made explicit threats: “There is no way that Australia can allow this deal to proceed. If it must, the nation should invade and capture Guadalcanal such that we engineer regime change in Honiara… If we don’t respond to this – it has to be us and Washington – then mate, it’s game over… China will have freedom of the seas with its navy throughout the South Pacific.” As the Australian newspaper put it, the deal “could hardly be more geopolitically significant for the challenge it presents to longstanding US hegemony in the region.”

It is the Solomons’ position in the south-eastern Pacific that makes the country so strategically significant for America’s future war against China. The impoverished country of 700,000 inhabitants has several deep-water harbours and sea-lanes which Australia and the US currently control and are determined to retain. The Solomon Islands was historically colonized by the British, then the Japanese, and became a key battleground during WW2, when the US war ousted Japan from the country during the six-month Battle of Guadalcanal in 1942-43. That battle was vital to the US victory against Japan, which established US domination over the Pacific up to the present.

After the Solomons gained independence from Britain in 1978, western supervision passed predominantly to Australia, with New Zealand a junior partner. Following a low intensity civil war from 1998-2003 over demands for secession by the poorest and most populous island Malaita, Australia occupied the country with a 2,000 strong force of troops and police as ‘peacekeepers’, imposing IMF austerity on the public sector and putting down strikes. Australia’s presence from 2003-2017 only stoked the rivalries between Malaita and the main Solomon island Guadalcanal, where the capital Honiara is.

The gamechanger occurred in 2019 when the Solomons switched diplomatic recognition from Taiwan to the People’s Republic of China after 36 years. In response, US Republican Senator Marco Rubio threatened, during a visit, that the US would cut off the Solomons’ access to global financial markets.

The following year the US gave $25 million in so-called ‘aid’ to Malaita – a far larger amount than aid to the Solomon Islands as a whole. These US bribes to Malaita, and threats to the national government, were part of an orchestrated strategy to use Malaitian secession demands as a divide-and-rule stick to force the national government back into the western fold. Encouraged by the US, the rightwing separatist group Malaita 4 Democracy demanded the immediate expulsion of all Chinese nationals from the island.

Then in 2021 around 1,000 separatists, egged on by the Malaitian prime minister Daniel Suidani, travelled to the main island Guadalcanal, targeting Chinese retail businesses and attacking Chinese locals. The rioters flew an Israeli flag and burnt government building in what was effectively a colour revolution orchestrated by the US and Australia. But they failed to unseat the government; a later no-confidence vote in parliament was also defeated. China has since deployed around a dozen police to train local forces.

Underlying the ongoing unrest in the Solomons is poverty and mass unemployment. The Solomons has the lowest Human Development Index and second lowest electrification rate of any small Pacific state, according to the World Bank. It’s no wonder that the Solomons government is attempting to free the country from western domination. Liu Ze, general secretary of Solomon Islands Chinese Business Council explained: “The economic structure of the Solomon Islands has not made any progress in the past 15 years, which made the ruling party realize that cooperating with the West did not result in development.” Now they have found an alternative major power in China that can provide a level playing field (Global Times, May 25, 2022). China is now the Solomons largest export destination, receiving 65% of the Solomon Islands’ exports, mainly timber, and Chinese investment and tourism have increased massively under the Belt and Road Initiative.

But China’s growing economic presence is being obstructed at every turn. A major contract with Huawei to lay a fibre-optic cable from the Solomons to Australia was cancelled in 2018 after Australia pushed for a no-confidence vote in the Solomons government, accusing Sogavare of corruption over the deal.

Yet China’s links with the Pacific islands are advancing nonetheless, aiding development in a poor region of the world. This week, China is hoping to sign a major deal with almost a dozen Pacific island countries covering security, trade and data communication co-operation. Kiribati, a small Pacific island nation that switched diplomatic recognition to the People’s Republic of China along with the Solomons, is to sign a deal giving China special fishing rights in one of the world’s biggest marine protected areas. Vanuatu has recently signed a contract with China for the construction of a new airport runway to give access to larger aircraft.

The advantage for these countries is that China, unlike western powers, does not seek to exploit their vulnerabilities. Chen Hong, president of the Chinese Association of Australian Studies, explained: “China believes that countries, no matter big or small, should be treated equally – they are not there for anyone to win over and to control.”

Meanwhile, the western powers are doing all they can to stem the loss of their hegemony. On the diplomatic front they are pressing the five remaining Pacific Island states that still recognise Taiwan not to follow the Solomons’ powerful example (as the most populous and influential of the Pacific island nations) in recognising the People’s Republic of China.

The West’s moves to stifle the Solomon Islands’ independent foreign policy are one aspect of the larger struggle to maintain imperialist control over the Pacific, which includes drawing Australia more closely into the US embrace. The development of Australia as the “southern anchor” for US military power – boosted under Obama’s Pivot to Asia that saw a major US base established in Darwin, northern Australia – puts it in the frontline of a war with China.

The nuclearization of Australia came a dangerous step closer with the recent AUKUS deal between it, the USA and the UK. AUKUS has torn up the UN Non-Proliferation Treaty by providing nuclear weapons to Australia in the form of eight or more US built nuclear submarines and accompanying technological know-how. The $100 billion worth of submarines will have a far longer range than the French submarines Australia had agreed to purchase, and will be used to enforce a US naval blockade of the Pacific shipping lanes on which China relies for raw materials and goods. In effect, AUKUS represents an extension of NATO into the Pacific Ocean.

Solomon Islands Prime Minister Sogavare complained that his country and others in the region “should have been consulted to ensure that the AUKUS treaty is transparent since it will affect the Pacific family by allowing nuclear submarines in Pacific waters.” But of course they were by-passed, just as the French were deceived by their imperialist rivals.

Despite the close US-Australia alliance, it is clear that the US is unhappy with Australia’s performance as its Solomons gendarme. The closure of its embassy in the Solomons in 1993 and the outsourcing of its security to Australia has been criticised by former senior US diplomat James Carouso, who said it had been a “mistake”. Now the US is planning to re-open its embassy in the capital Honiara to regain direct control. So much for respecting national sovereignty – an idea frequently invoked to promote NATO’s proxy war against Russia.

The ‘backyard’ is “where we relieve ourselves”

Not that Australia is any better, with its frequent references to the Solomons as “our backyard” (Daily Mail, 4 May, 2022). This insulting term was condemned by Sogavare who said a backyard was a place “where rubbish is collected and burned”, and “where we relieve ourselves” (May 4, 2022). Compare this to China’s view that the Pacific Islands are “neither the backyard of any country nor an arena for great power games” (CGTN, 19 April, 2022). Tarcisius Kabutaulaka, a Solomon Islander academic at the University of Hawaii, observed that the western position was to lay down the law and say “you can’t have this kind of relationship with China. The irony is that we can and we do.”

The insistence by the western powers on retaining control over the Solomons is not some faraway problem for us in Britain; rather, it represents a clear and present danger to world peace. Biden’s recent off-the-cuff reversal (May 22) of the US’s long-held One China policy over Taiwan shows that the US is deadly serious in its intention to prevent China’s rise – and western threats to invade the Solomon Islands make that country one of the flashpoints where the US war on China could begin.