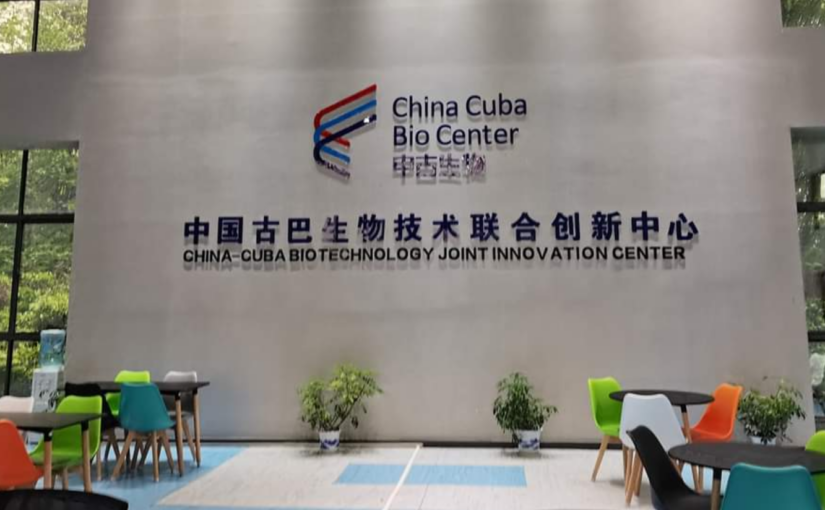 We’re pleased to re-publish this important article by Sara Flounders, posted in Workers World on 7 June 2022, about the progress made by a Cuban-Chinese cooperation project towards a universal coronavirus vaccine. Sara explains that these two socialist countries are far better positioned than their capitalist counterparts to work together on projects of long-term value to humanity, because their social systems are centered on meeting human need, as opposed to maximizing private profit. The article goes on to detail the outsized contribution made by China and Cuba to suppressing the pandemic in the developing world, as well as the ongoing and deepening cooperation between the two countries in a number of crucially important areas. Sara concludes: “The growing scientific cooperation of China and Cuba represents a hopeful future for humanity. Global problems can be solved. What is required is economic planning, cooperation and sharing of scientific knowledge and technology.”

Cuba and China formally announced June 2 that they have filed for joint patent for a Pan-Corona vaccine. The new vaccine, a collaboration between the biotechnological sectors of the two countries, is the first patent for a single vaccine effective against the many variants of COVID-19.

News of the jointly developed vaccine is particularly exciting because of the two countries’ cooperative approach in a field that is highly competitive, secretive and totally profit-oriented in Western capitalist countries.

The Pan-Corona vaccine was announced to be effective against present variants of COVID-19 and thus of value in the current pandemic.

But its strength is that it could also be effective against the appearance of new pathogens belonging to this family of viruses, noted Eduardo Martínez Díaz, president of the state-owned BioCubaFarma Business Group. (telesurenglish.net, June 3)

The Pan-Corona project is based in a joint biotechnological research and development center, operating since 2019 in the city of Yongzhou in Hunan province, and led by experts from Cuba’s Center for Genetic Engineering and Biotechnology (CIGB). Dr. Gerardo Guillén Nieto, the center’s director of Biomedical Research, explained the project arose at the request of the Chinese and had the approval of Cuba’s Ministry of Science, Technology and Environment. The equipment and laboratories at the Yongzhou center were designed by Cuban scientific personnel. (Radio Havana Cuba, June 3)

The two countries focused on coronaviruses because of the global pandemic and because this is the family of viruses most likely to jump from animals to humans. This phenomenon, called zoonosis, was the cause of previous epidemics such as the 2002 SARS outbreak and the 2012 MERS infection — both serious respiratory illnesses.

The cooperative approach used by Cuba and China does get debated as a research need by those practicing Western medicine.

But the capitalist pharmaceutical research industry is solely oriented to development of vaccines and medicines for the highest rate of immediate profit and the largest number of sales. A vaccine with a series of booster shots for each separate strain of the current coronavirus — and then the additional sale of entirely new vaccines for each emerging infection — means billions of dollars in sales and profit for the pharmaceutical industry.

Cooperation for short-term or long-term solutions threatens the future of this for-profit industry.

The pharmaceutical companies in the U.S., the European Union and Japan — the major capitalist economies — are very willing to accept government funding to develop vaccines. However, control of the patents and resulting profits from that research is always privately expropriated by the corporate stockholders.

Once the vaccines are developed through government funding, then the governments that backed the research have to buy back the products from the corporations — at high prices. Market control and private corporate ownership are the primary concerns.

Peoples Vaccine Alliance estimated in 2021 that the companies behind three of the most successful COVID-19 vaccines — Pfizer, BioNTech and Moderna — were making combined profits of $65,000 every minute, $1,000 a second. These companies have sold the majority of their doses to wealthy countries, leaving behind low-income countries with unvaccinated populations, gravely ill people and mounting death tolls. Pfizer and BioNTech have delivered less than 1% of their total vaccine supplies to low-income countries, while Moderna has delivered just 0.2%. (tinyurl.com/29w8pdda)

Economies based on social planning and public ownership of major industries have the ability to develop solutions through strategies impossible to be used by privately owned industries. Socialist countries have the capacity to seek common solutions to global challenges through cooperation and solidarity.

China has provided over 2 billion vaccine doses and an array of other supplies and assistance to more than 150 countries, regions and international organizations during the pandemic.

Cuba — despite the U.S. blockade, its small size of 11 million people and its limited resources — has continued its highly developed medical research and sent more than 40 medical teams to more than 30 countries to fight COVID-19. Cuban and Chinese medical teams have maintained coordination in many developing countries and contributed jointly to the fight against COVID-19.

The U.S. corporate media has sought to discredit and undermine this solidarity and discredit the extensive medical treatment that is generously provided by these two socialist-oriented countries. But the capitalist U.S. cannot match their accomplishments. Instead, it can only impose sanctions in a desperate effort to halt their steady progress.

The world needs far more cooperation and joint efforts to overcome the immediate pandemic and the environmental crisis and health problems of the future. Increasingly countries hobbled by U.S. economic sanctions see that cooperation is the way to survive.

The decades of cooperation between Cuba and China is summarized in a report jointly written by Carlos Miguel Pereira Hernández, of the Embassy of the Republic of Cuba to the People’s Republic of China, and Huiyao Wang and Dr. Lu Miao, of the Center for China and Globalization (CCG) in Beijing. (PDF available at doi.org/10.1007/978-981-16-8086-1_20)

“Cuba and China, a Paradigmatic Partnership in a Changing World Context” outlines their potential to strengthen public health cooperation, promote health services and build production and trade of medicines. The report explains that mutual solidarity and support can turn the joint fight against COVID-19 into a new symbol of friendship and an example of both bilateral and global cooperation:

“The high-level bilateral political relationship and the unwavering friendship between the two communist parties, governments and people allow us to continue to strengthen a strategic alliance and a special relationship. As socialist countries . . . Cuba and China have unlimited potential, which both sides must take advantage of for the benefit of our people and humanity.”

As the report summarizes, the connection between the two revolutions for socialism dates to September 2, 1960, when revolutionary Cuba broke relations with Taiwan and recognized the People’s Republic of China.

In November 1960, an official government economic delegation led by revolutionary leader Ernesto “Che” Guevara visited China, where he was received by Chairman Mao Zedong and other Chinese leaders. The governments of the two countries signed their first economic and technological cooperation agreement more than 60 years ago.

Today, many Chinese companies are involved in priority projects in Cuba, and many of these projects are linked to the construction and modernization of infrastructure, telecommunications, renewable energies and the tourism sector.

The Joint Group for Biotechnological Cooperation Cuba-China reflects this bilateral cooperation in the biotechnology and biopharmaceutical sector. This has reached unprecedented levels, with both countries determined to continue expanding for the benefit of both peoples.

BioCubaFarma promotes cooperation and business with Chinese companies and institutions in the field of biotechnology and pharma industry. The relationship advances product development to gain faster registration approvals for its products in China. BCF is working with local Chinese governments in four cities: Chengdu, Yongzhou, Shanghai and Changchun, as well as with universities and institutes to foster innovation by setting up research-and-development centers and joint laboratories.

Three Chinese/Cuban ventures are making important contributions to human health and agriculture: Biotech Pharmaceutical in Beijing, Changchun Heber Biological Technology in Jilin province and Shandong Lukang Heber in Shandong province. These develop innovative treatments for diseases of high incidence like cancer, diabetes and hepatitis and have transferred a total of 10 technologies to China thus far.

Cooperation for the future of humanity

Capitalism’s drive to maximize profits every quarter means that the system has no structure capable of overall long-term planning. The economic system itself requires ruthless competition. No matter how needed, cooperation is impossible.

The growing scientific cooperation of China and Cuba represents a hopeful future for humanity. Global problems can be solved. What is required is economic planning, cooperation and sharing of scientific knowledge and technology.