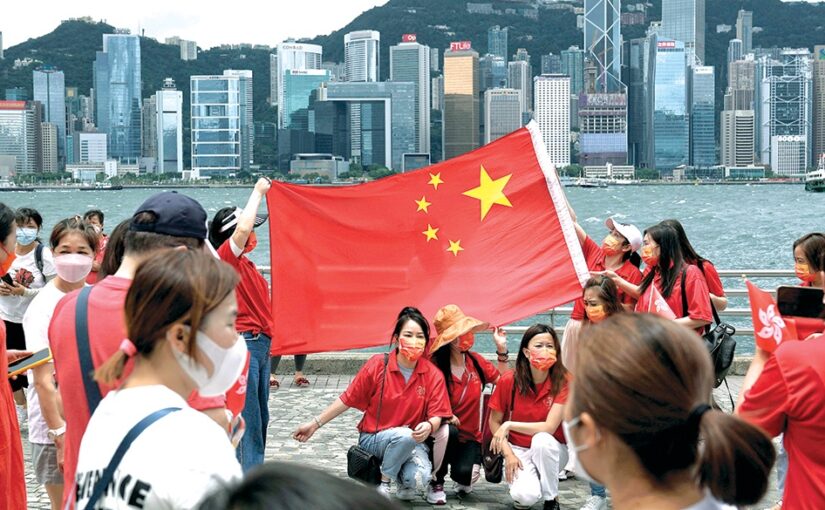 On his first visit back to Hong Kong since 2019, long-term East Asian resident, and Friends of Socialist China Advisory Group member, Kenny Coyle writes that he found a city becalmed. “Rarely”, he observes, “has Western mainstream propaganda so successfully shrouded the truth about a city and society as open as Hong Kong.”

Kenny clarifies the meaning behind China’s insistence that Hong Kong was never a British colony, but rather a Chinese territory under illegal British occupation. His article, which also features an interview with Nixie Lam, a Legislative Council member from the Democratic Alliance for the Betterment and Progress of Hong Kong (DAB), the territory’s largest and most influential patriotic political party, is full of useful information. It was originally published in the Morning Star and we are pleased to reprint it here.

Hong Kong marked the 25th anniversary of its return to Chinese sovereignty with Chinese president Xi Jinping appearing in the city to witness the inauguration of the Chinese territory’s new leadership headed by John Lee.

The largely indoor ceremony had been forecast to take place amid a mild tropical typhoon, but for the past three years Hong Kong has been battered by quite different kinds of storms.

Xi’s visit takes place after an unprecedented period of turmoil. The first stage beginning in 2019 was characterised by a wave of initially peaceful mass protests against extradition legislation, which rapidly spiralled into violent anti-China protests.

The second stage by the ongoing battle to control the Covid pandemic in the city.

In my first visit since 2019, Hong Kong certainly seems becalmed. The city’s MTR rail network is back to pristine perfection. The political arson that saw 138 of the city’s 161 stations vandalised (including the deliberate destruction of lifts for the disabled and essential safety equipment) during the 2019 protests has long been cleaned up.

Temperature and Covid checks are carried out routinely at restaurant and shopping areas, with minimal inconvenience, although the city continues to enforce a seven-day quarantine on incoming passengers from overseas.

The image in Western media of a city writhing under a police state is belied by the reality on the ground.

Bars and restaurants are busy, as any five-minute evening walk around my Tsim Sha Tsui neighbourhood in Kowloon shows, supermarket shelves are full and whatever the talking heads of the local CNN or BBC bureaus would have you believe about “threats to freedom” on screen, they still somehow manage to prop up the main bar in the Foreign Correspondents Club each evening after their shifts.

Rarely has Western mainstream propaganda so successfully shrouded the truth about a city and society as open as Hong Kong’s.

The 2019 peaceful protests degenerated into the ugliest side of the anti-China movement, with black-shirted groups attacking anything and anyone that failed to kow-tow to their agenda.

Trade union offices, political parties and even those whose only crime was speaking the standard putonghua (Mandarin) version of Chinese in public were targeted for mob attacks.

Living in the neighbouring Special Administrative Region of Macao during this time, I not only witnessed the extremist antics at first hand on visits to Hong Kong (for example during their brief blockade of the city’s immigration department) but could watch shocking broadcasts of the petrol-bombers and barricade builders live-streamed on Hong Kong TV channels.

Just as shocking was the absence of these easily available images on BBC or CNN broadcasts.

A more recent manufactured furore in the British media has been over Hong Kong textbooks being “rewritten” in relation to British rule in Hong Kong prior to China reassuming sovereignty in 1997.

The assumption, of course, is that Chinese history can only be accurately understood through a Western lens.

The average reader would be forgiven for viewing this another ridiculous example of CPC censorship, an Orwellian erasure of the well-known history of British administration in Hong Kong.

In 1972, one year after the PRC took China’s seat at the UN, the PRC successfully removed Hong Kong and Macao (then under Portuguese fascist administration) from the list of colonised territories.

Hong Kong was not to be considered a British colony, it was a Chinese territory under illegal British occupation, an extremely important distinction in China’s eyes.

People’s China never established a diplomatic or consular presence in British-ruled Hong Kong, believing that this would legitimise British rule.

Instead, the office of the New China News Agency (better known today as Xinhua) was the de facto centre of contacts between the British authorities and the PRC government within the territory.

The issue of Hong Kong’s pre-1997 status has become more urgent recently, after the British government and media falsely claimed that the Sino-British Declaration of 1984, signed by the Thatcher government and China, somehow gave Britain some special rights to intervene in Hong Kong affairs after 1997.

The text of the declaration clearly states the opposite: 1997 marked the return of undivided Chinese sovereignty over Hong Kong.

Subsequent developments, including the much-belated extension of national security legislation in 2020 are entirely consistent with the principle of “One Country, Two Systems” first outlined by Deng Xiaoping in the 1980s and are in any case covered by provisions in an annex to the Basic Law, Hong Kong’s mini-constitution.

But if Western eyes are on the past, China is looking forward. Plans are in place to create a Greater Bay Area, encompassing the special administrative regions of Hong Kong and Macao and nine major cities in Guangdong province.

The aim is to use the synergy of these southern Chinese cities to create a dynamic economic hub of around 70 million people that will eventually dwarf most national and regional economies.

Many people in Hong Kong believe the city’s future lies in closer co-operation not in conflict with the rest of China.

Nixie Lam, a member of Hong Kong’s legislative council (Legco) and a representative of the Democratic Alliance for the Betterment of Hong Kong (DAB), the largest and most influential party within the patriotic camp, holds to this perspective.

She believes the new administration led by Hong Kong chief executive John Lee has the opportunity to put the territory back on the right track.

Lee, who takes office on July 1, has already outlined a platform that the future government will set clear targets and key performance indicators (KPIs) for selected tasks within the first 100 days of his new administration.

Some of this is designed to streamline government functioning, but he has also pledged to accelerate land and housing development, shorten the waiting time for public housing and address the city’s vast wealth gap.

“Hong Kong has wasted a lot of time and opportunities over the past few years. I see very high expectations among Hong Kong citizens. We have missed out on a lot. Where are we going to develop and to excel is the key, but time is very limited,” stresses Lam, a former grassroots district councillor.

“Perhaps that’s why Lee came up with his 100 days KPI promise, to show he would make visible changes in different aspects of policies and strategies.

“I’ve joined working groups scrutinising the new government structure. If you look closely, it’s easy to see that they really want to tackle some of the unresolved issues we face by bringing outside experts into the administration.”

Lam, herself a graduate of the University of Queensland in Australia, is nonetheless tired of Western countries continually lecturing Hong Kong.

“It’s boring to hear that democracy or One Country, Two Systems is dead. For those who live in Hong Kong, we know clearly who killed our democracy in 2019.

“Rioters and mobs were everywhere destroying public facilities, paralysing railway systems and so on but they were called ‘Freedom Fighters’ by Western countries. These double standards are not new in Hong Kong,” she insists.

“Hong Kong citizens know what’s best for our city. It is not begging overseas countries to sanction our city, it is not calling for American troops to take over our city, and it is definitely not the violent ‘democracy’ that they embraced.

“The city has been stablised. Ordinary citizens do not need to worry about being targeted by extremists any more. Discussions are no longer highly polarised but focus more on which strategy is best for the city.

“I guess that some people in Western countries do not want to see that our life is getting back to normal. People in Hong Kong are more focused on our Covid strategy and want to find more targeted solutions, finding a way that will balance reopening the city with ensuring people’s lives and health are protected,” she says.

Despite the challenges, Lam is clear about the way forward: “It is for us, Hong Kong citizens to work jointly toward rebuilding our city.”

2 thoughts on “Hong Kong: the truth is out”