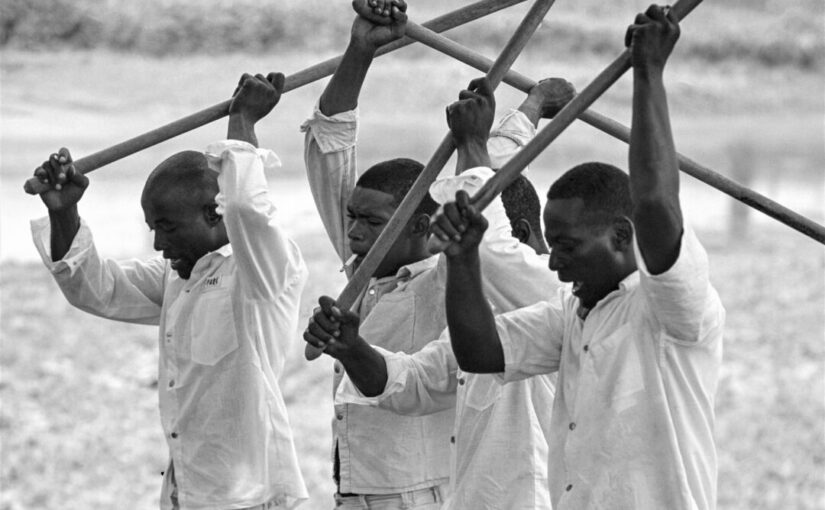 The “Uyghur Forced Labor Prevention Act”, the latest anti-China legislation to be enacted in the United States, came into effect on June 23, having been signed by President Biden last December. Under this law, all goods from China’s Xinjiang are barred from the US unless the importer can prove they were produced “free of forced labor”. It is, of course, notoriously difficult to “prove” a negative, something compounded by the arbitrary designations and assertions already advanced by the US with regard to the autonomous region.

In this article, originally published by Workers World, Betsey Piette notes that this measure will harm US industries and further fuel inflation. More especially she notes that, “if US politicians and anti-China lobbyists are genuinely concerned about protecting people from being subjected to ‘forced labor,’ they should look no further than the US prison-industrial complex. According to a report the American Civil Liberties Union released June 15, incarcerated workers in the US produce roughly $11 billion in goods and services each year but receive pennies an hour in ‘wages’ for their work.”

The US imprisons a higher percentage of its population than any other country, with some 800,000 people subject to such forced labor.

First signed by President Joe Biden in December, the “Uyghur Forced Labor Prevention Act” took effect June 23. Under this latest anti-China measure, all goods made in Xinjiang province are banned, unless the importer can demonstrate the imports were produced “free of forced labor.” The ban also impacts programs that transport Uyghur workers to job sites.

The new law could affect a handful of companies or far more. Its implementation could result in more detention of goods at the U.S. border, further delaying product deliveries and further fueling inflation. Hardest hit will be U.S. industries that rely on the import of commodities using lithium, nickel manganese, beryllium copper and gold mined in Xinjiang. These include manufacturers of solar panels, auto companies and energy firms.

This latest U.S. anti-China propaganda campaign is based on unsubstantiated claims that Uyghur people were forced to take up new jobs in industries recently relocated to Xinjiang.

However, if U.S. politicians and anti-China lobbyists are genuinely concerned about protecting people from being subjected to “forced labor,” they should look no further than the U.S. prison-industrial complex. According to a report the American Civil Liberties Union released June 15, incarcerated workers in the U.S. produce roughly $11 billion in goods and services each year but receive pennies an hour in “wages” for their work.

Jennifer Turner, principal author of the report stated: “The United States has a long, problematic history of using incarcerated workers as a source of cheap labor and to subsidize the costs of our bloated prison system. Incarcerated workers are stripped of even the most minimal protections against labor exploitation and abuse. They are paid pennies for their work in often unsafe working conditions, even as they produce billions of dollars for states and the federal government.”

In the U.S., which imprisons a higher percentage of its population than any other country, roughly 800,000 people are subject to this forced labor, making roughly 13 cents to 52 cents per hour. In Alabama, Arkansas, Florida, Georgia, Mississippi, South Carolina and Texas, incarcerated workers are essentially enslaved — paid nothing for their labor.

Over 75% of incarcerated workers interviewed by the ACLU told researchers that if they refuse to work, they are subjected to punishment, including solitary confinement, loss of family visits and denial of reduced sentences.

The Global Times, which is publishing a series of stories to expose the U.S. as a real “contemporary slavery empire,” says that this exploitation of incarcerated workers “plainly demonstrates the U.S.’s real disregard for basic human rights and their brutal exploitation of the country’s workforce.”

The 13th Amendment to the U.S. Constitution, passed on Jan. 31, 1865, while abolishing enslavement actually allowed enslavement to remain legal, as “a punishment for crime whereof the party shall have been duly convicted.” This amendment lets the government legally impose forced labor on incarcerated workers across the country.

Part of the problem for the U.S. enforcement of the anti-China labor ban is identifying what companies produce goods involving Uyghur labor in Xinjiang province. But it is very easy to find what U.S. companies are profiting directly from privatizing prisons or exploiting prison labor.

A majority of the labor performed by exploited prisoner-workers directly benefits the states managing prisons. Incarcerated workers are forced to perform various tasks from food preparation to laundry services. But many private companies profit as well.

Two major companies — Core Civic and Geo Group — are the giants of the U.S. private prison industry. Core Civic recognized $526 million in annual gross profits in 2021. Geo Group made $628 million. But these companies are not alone in profiting from prisons.

A Feb. 15 report by CareerAddict.com estimated that 4,200 large corporations use over 600,000 incarcerated workers to produce goods and services. There are several well-known companies on this list. McDonalds and Wendy’s use prison labor to produce frozen beef patties and other products. Calls to Verizon, Sprint or Avis for service may be answered by incarcerated workers.

Walmart and Starbucks use enslaved prison labor to cut down their costs of producing goods and services. Prison labor produces circuit boards for Compaq. For years Aramark has used incarcerated workers to prepare and package most food items used in prisons. In 2019 Aramark was sued for using “involuntary servitude” — they were not paying incarcerated workers anything.

Politicians could amend the 13th Amendment to remove the prison labor exclusion clause. Biden could take measures to end contracts with private prison companies. But none of this is likely to happen under capitalism.

Those genuinely concerned about “forced labor” should be on board with the movement to abolish prisons.

2 thoughts on “Who really profits from ‘forced labor’?”