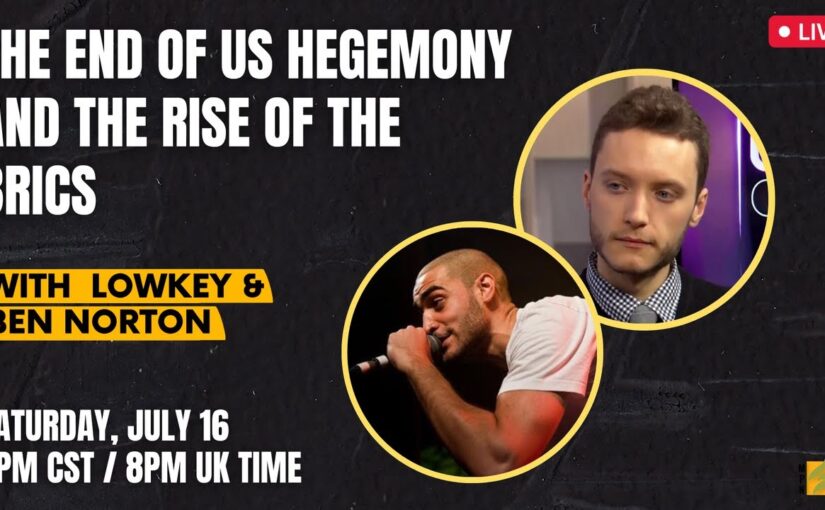 In this episode of The Watchdog (a MintPress News podcast hosted by British-Iraqi political analyst and hip-hop artist Lowkey), Lowkey interviews Ben Norton about the significance of BRICS and the Shanghai Cooperation Organization (SCO) in relation to the decline of US-led imperialism and the emergence of a multipolar world.

The two explain the dimensions and purpose of BRICS and the significance of its proposed expansion to include Iran and Argentina, among others. Ben mentions Zbigniew Brzezinski’s 1997 book The Grand Chessboard, in which Brzezinski urges US policymakers to do everything possible to prevent the possibility of a China-Russia-Iran alliance in opposition to US hegemony. With the growing influence of multilateral organizations of the Global South such as BRICS, the SCO, the Community of Latin American and Caribbean States (CELAC) and others, Brzezinski’s nightmares are being turned into reality.

Lowkey and Ben discuss the escalating New Cold War, in which the US is forcing countries around the world to pick between “the West or the rest”. The US is surprised to find that many countries are unwilling to align themselves exclusively with the West – they want to continue having mutually-advantageous relations with China and they are refusing to join the unilateral sanctions on Russia. Indeed, for developing countries, China and Russia are better and more reliable partners than the West: they don’t mandate a neoliberal economic model, they don’t force privatisation, they don’t impose crippling debt conditions, and they don’t compromise other countries’ sovereignty.

Ben highlights China’s economic successes under its model of Socialism with Chinese Characteristics, noting that with over 40 percent of GDP controlled by state-owned enterprises, the major banks owned by the state, all land owned by the state, and the state closely regulating the overall economy, China is showing the world that neoliberalism is by no means inevitable or indeed desirable.

The two conclude that the New Cold War is very unlikely to work in the US’s favor; that BRICS and others are opening up an important space for sovereign development around the world; that dollar hegemony is under significant threat; and that developing countries in particular stand to benefit a great deal from an emerging multipolarity.

The video is embedded below.