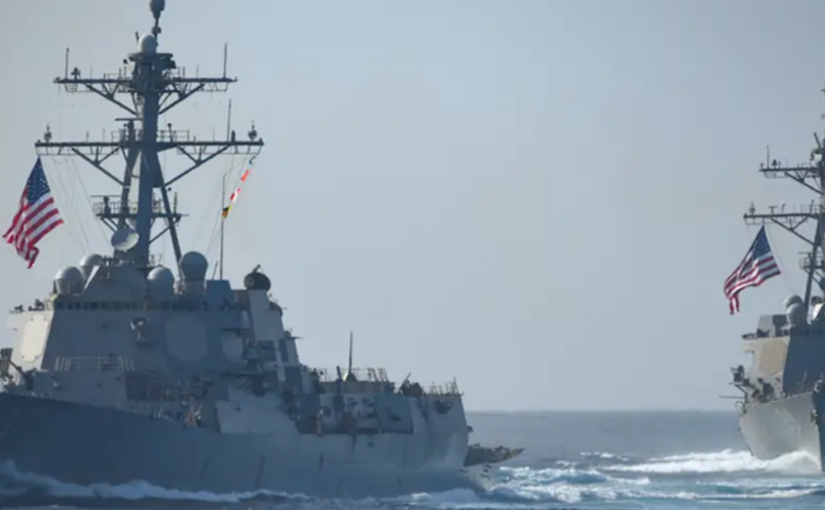 We are pleased to republish the following article from the latest issue of Socialist Voice, newspaper of the Communist Party of Ireland.

Graham Harrington outlines the history of imperialist meddling in the Taiwan issue, from the Dutch aggression in the seventeenth century through to the current instigation and backing of secessionist currents among the Taiwan authorities by US imperialism. Any so-called “independent Taiwan”, the author notes, would only meet the same cruel fate as Guam, Hawaii and Okinawa, namely that of a US military colony. In any event, he observes, this will never be allowed by the People’s Republic of China. Harrington concludes: “The desire of China’s people to reunify with Taiwan needs no justification for an Irish audience, given our own situation in a country partitioned by external forces.”

The recent visit of the speaker of the US House of Representatives, Nancy Pelosi, to Taiwan has sharply increased the prospect of war in the region.

The Chinese government and people strongly believe Taiwan to be their territory; and the no. 3 official in the US government visiting Taiwan is a clear provocation.

Taiwan was invaded by Dutch colonists in 1624, only to be repulsed in 1662 by the Chinese national hero Zheng Chenggong. Taiwan became a full province in Qing Dynasty China in 1885. Ten years later the then Qing government lost Taiwan in a war with imperialist Japan. The Japanese were sold weapons by the United States with which to do this.

After the surrender of the Japanese following the Second World War, the Republic of China continued its war against the Chinese communists, who would go on to defeat the nationalist KMT and proclaim the People’s Republic in 1949, thus bringing to an end the Chinese Civil War.

Efforts to defeat the remaining KMT forces on Taiwan were delayed by the US aggression in Korea, with hundreds of thousands of Chinese soldiers engaging American and other troops; and by the time the Korean War ended the United States had deployed forces to prevent the communists entering Taiwan. This would later increase to tens of thousands of US soldiers, and nuclear weapons, on the territory.

The present entity known as the “Republic of China” had China’s seat at the United Nations until 1971, when the People’s Republic was recognised by the international community as the true representative of the Chinese people, with even the United States opening diplomatic relations with the PRC in 1979—and, in the process, abandoning its military presence in Taiwan.

It was clear that the Taiwan authorities could not seriously claim to represent the Chinese people. Their case only weakened further after China’s “Reform and Opening Up” led to its economic boom and corresponding improvement in the PRC’s global standing. Taiwan remained a dictatorship under the KMT until the late 1980s, with underlying tensions between the mainland KMT elite who arrived in 1949 and those who had emigrated from Fujian province over the centuries. During its rule the KMT brutally suppressed communists and leftists.

After so-called “democratisation” a variety of political forces emerged in Taiwan. These included, for the first time, pro-independence forces, and even some who wanted Taiwan to become the 51st state of the United States! Chief among these was the Democratic Progressive Party, the present ruling party in Taiwan, which is pro-secession.

In recent decades the Taiwan authorities have promoted a distinct “Taiwanese” identity, and political leaders have endorsed abandoning the One China principle.

Of course Taiwan will never be an independent state. Firstly, the PRC has stated that a declaration of independence would force it into military action to retake the territory. Secondly, a hypothetical “independent” Taiwan would essentially be a colony of the United States: its fate would be much the same as US military colonies in Guam, Hawaii, and Okinawa.

Hawaii was a sovereign state until the United States invaded and annexed it in 1895. It is now the site of the US army’s Pacific Command. Okinawa, a part of the Ryukyu Islands, was independent until invaded by Japan in 1879 and then occupied by the United States after Japan’s defeat in the Second World War. Today, while Okinawa only makes up 1 per cent of Japan’s territory, it has 70 per cent of the US military presence in Japan.

In Okinawa alone, more than 576 American military personnel have been arrested for serious crimes, such as murder and rape. No wonder that these bases are sites of regular protests.

The People’s Republic and Taiwan enjoyed developing relations up to very recently, with students from both travelling to attend university, and tourists going on holiday. Taiwan is dependent on the mainland’s economy for its own economic development.

The PRC has offered reunification under the “One Country, Two Systems” model, similar to Hong Kong and Macau. This would bring Taiwan into the People’s Republic as an autonomous region, keeping its own political-economic system for now.

China’s recent military exercises, which surrounded the territory of Taiwan, show that the United States cannot prevent China taking military action should the situation continue to deteriorate. The United States has given Taiwan $70 billion in military aid since 1979. It is clear that US imperialism is intent on provoking the Chinese leadership, despite the Chinese having the military advantage when it comes to the region around Taiwan.

The desire of China’s people to reunify with Taiwan needs no justification for an Irish audience, given our own situation in a country partitioned by external forces. The United States is making a mistake in not concentrating on its own problems rather than meddling in China’s internal affairs, as a defeat against China—coming so soon after the war in Ukraine and the withdrawal from Afghanistan—would show US imperialism to be just a paper tiger.

2 thoughts on “Imperialism and Taiwan”