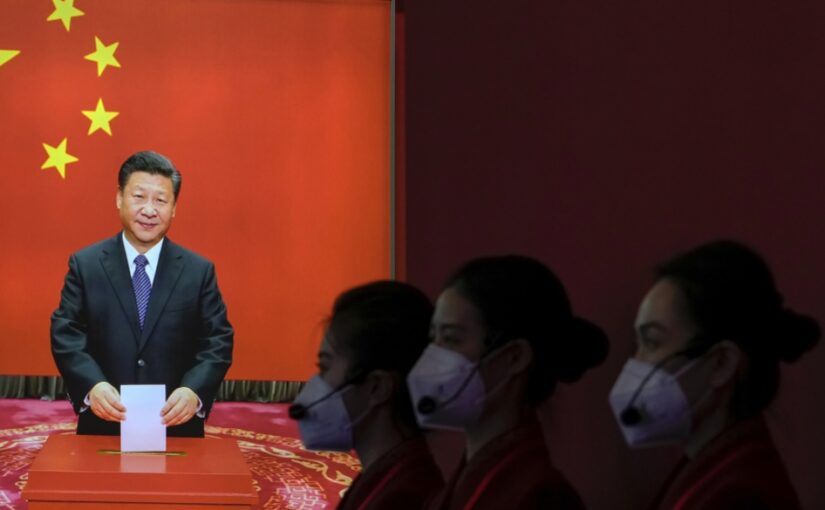 In the following article, first published in the Morning Star, Friends of Socialist China co-editor Keith Bennett previews the 20th National Congress of China, which started on 16 October 2022. Noting the superficial and, in no small measure, racist coverage of the Congress in the Western mainstream media, Keith explores some of the key themes that are likely to figure prominently in the proceedings, including common prosperity, tackling inequality, continuing the struggle against corruption, and promoting sustainable development and the pursuance of an “ecological civilisation”.

Keith notes that, at the 19th Congress five years ago, Xi Jinping defined the principal contradiction in Chinese society as being between unbalanced and inadequate development on the one hand and the people’s ever-growing needs for a better life on the other. As such, the CPC-led government has in recent years developed a laser focus on corruption, regional disparities, excessive inequality and environmental degradation; since 2020, the extraordinarily effective campaign to suppress Covid-19 must be added to this list. Readers in the West may well find themselves wishing their own governments would learn a lesson or two.

The article concludes on an inspiring note: “In July 1921, 13 delegates representing 57 party members met in conditions of secrecy, in fear of their lives but with great optimism and courage, to found the Communist Party of China. From there to a party of nearly 97 million, from a ruined to a strong and proud nation, is a long march without historical equal.”

The Communist Party of China (CPC) will open its 20th national congress on October 16. While Western media obsess about personalities, gossip and supposed intrigues, a sort of the West Wing meets I, Claudius, overlain with a not very well disguised coating of racist orientalism, this is actually a very serious political event.

How could it be otherwise? The CPC leads a country of some 1.4 billion people, the most populous on Earth. That country is the world’s second largest economy. By some methods of calculation, it may already be the largest.

As the CPC is a proudly Marxist party and leads a country engaged in a long-term socialist project, this five-yearly gathering is naturally of great interest to the communist and socialist movements.

However, considering China’s weight and role in the world, whether in economy, geopolitics or climate change, its decisions will impact in some way on every human being on Earth.

As befits such a serious political event, the congress will have been meticulously prepared. The political report to be delivered by general secretary Xi Jinping will sum up the work since the 19th congress held in October 2017 and set out the roadmap not just for the next five years, but also, more generically, to the 100th anniversary of the People’s Republic in 2049, by which time the goal is for China to have become a highly developed, modern socialist country, with 2035 being seen as a significant midway point from the “first centenary,” namely that of the CPC last year.

Certainly, the report will bear Xi’s personal imprint and reflect his leading role, but it will also be very much a collective effort. Over the last year, it will have gone through numerous drafts, with a huge number of contributions and suggestions from specialised groups and party structures at all levels from the grassroots up.

The contrast with the clownish and dysfunctional farces into which the conferences of Britain’s major political parties have descended could scarcely be starker.

The Chinese media has reported that a total of 2,296 delegates have been elected to the congress. Quoting an official statement, China Daily reported that they “are outstanding CPC members who are highly qualified ideologically and politically, have good work styles and high moral standards, are competent in discussing state affairs and have made remarkable achievements in their work.”

Considering that they have been chosen to represent more than 96.7 million party members that should certainly be the case.

The paper further reported: “Among the delegates are party members in leadership positions and those from the grassroots, a considerable number of female party members and those from ethnic minority groups. They also come from all walks of life, such as the economy, science, national defence, law enforcement, education, health, sports and culture.”

The congress can be expected to reflect both the essential continuity of the long Chinese revolution, through all its many phases, but particularly the changes that have occurred since Xi was elected to lead the party at the 18th congress in 2012.

At the last congress, Xi announced that the principal contradiction in Chinese society had changed. It was now to be understood as being between unbalanced and inadequate development on the one hand and the people’s ever-growing needs for a better life on the other.

This may seem to be a somewhat arcane formulation, but it is actually extremely important. Following the death of Mao Zedong in 1976 and the formal end to the Cultural Revolution, the party leadership abandoned the view that the principal contradiction in Chinese society was represented by the class struggle, considering it inappropriate for a country in which the basic system of socialism had already been established, but which had a crying need for development.

Instead, the leadership around Deng Xiaoping decided that the principal contradiction was now that between people’s ever-growing material and cultural needs and China’s relatively backward social productive forces. According to this formulation, overriding priority was to be given to development.

The result was, of course, the most rapid and dramatic economic transformation of any society in human history. With hundreds of millions of people lifted out of poverty, the creation of the world’s largest middle income group, a country whose per capita GDP was below that of most of sub-Saharan Africa (albeit its “social wage” was mostly higher) and which was quite marginal to the global economy, became the “workshop of the world,” and by 2020 was the top trading partner of some 128 countries.

However, these stupendous achievements did not come cost-free. They were also accompanied by such negative phenomena as widespread corruption, regional disparities and excessive inequality and environmental degradation. These are precisely the issues that Xi has worked tirelessly to correct over the last decade.

The new definition of the principal contradiction in Chinese society means, therefore, that China now looks to steady rather than stellar growth – the emphasis has moved from quantity to quality, to sustainability and to a people-centred approach and results.

Chinese leaders from the 1980s onwards repeatedly warned that corruption posed a mortal threat to socialism and the people’s republic, but, despite some sporadic crackdowns, the problem festered and grew.

Xi, in contrast, has waged this battle consistently and with a ferocity not seen before, not hesitating to take down corrupt officials even at the level of the politburo standing committee. This determination on Xi’s part is possibly the biggest single reason for the huge popularity he enjoys among the vast majority of the Chinese people, something to which even Western pollsters have to admit, even if to their chagrin.

Another area where we might expect the congress to focus is on common prosperity. This was a theme first advanced for China by Mao Zedong in 1953 and might reasonably be said to be a basic tenet of socialism and communism.

But it has been revised and pursued by Xi, particularly since China achieved its “first centenary goal” of completely eliminating extreme poverty a little ahead of schedule and on the basis of both continuing to “grow the pie” but also dividing it better.

In terms of the environment, one of Xi’s favourite expressions is that lucid waters and lush mountains are as precious as gold and silver. And while much remains to be done, China is clearly leading the world in fields such as renewable energy and reforestation.

It has set a goal of hitting peak emissions before 2030 (bearing in mind that China is still a developing country) and becoming carbon neutral by 2060. And unlike the capitalist countries, China has a good record of keeping to and meeting, if not exceeding, its targets.

Last year, the CPC adopted a resolution on the Major Achievements and Historical Experience of the Party over the Past Century, only the third such resolution it has adopted in its history.

Whilst fully affirming all the great achievements, it pointed out that China “faces no small number of long unresolved, deep-seated problems as well as newly emerging problems regarding reform, development and stability.

“Moreover, previously lax and weak governance has enabled inaction and corruption to spread within the party and led to serious problems in its political environment, which has harmed relations between the party and the people and between officials and the public, weakened the party’s creativity, cohesiveness and ability and posed a serious test to its exercise of national governance.”

On this basis, it considered a key achievement of Xi’s leadership as having “solved many tough problems that were long on the agenda but never resolved and accomplished many things that were wanted but never got done.”

The same can also be said with regard to the revitalisation of the party itself over the last 10 years. The strong impetus given to the formation and operation of party branches and committees in the private sector of the economy, including foreign-owned firms and joint enterprises, along with the renewed stress on the study, application and development of Marxism, are all key indicators here.

But perhaps nothing stands out more than the role played by party members in China’s dynamic zero-Covid policy, which has saved millions of lives — from the tens of thousands of doctors and other medical workers from the ranks of the party who volunteered to go to Wuhan in the first days of the pandemic, to the revived neighbourhood committees and the millions of party volunteers, redolent of the social cohesion of much of the Mao era, or of the Committees for the Defence of the Revolution in Cuba.

In foreign policy terms, the congress will doubtless take stock of the increasing danger of imperialism’s new cold war, particularly the provocations around Taiwan and the attempts to deprive China of access to certain key advanced technologies.

But despite all attempts at disruption, China’s relations with the great mass of developing countries continue to go from strength to strength. Projects such as the Belt and Road Initiative will be further refined to ensure that they are environmentally sustainable and bring real and tangible benefits to local people.

As Xi said at the last congress, socialism with Chinese characteristics “offers a new option for other countries and nations who want to speed up their development while preserving their independence.”

The congress and the initiatives that come out of it will also doubtless reflect the increasingly prominent part being played by the CPC in the international communist movement, as reflected in the steady stream of bilateral, regional and world conferences of Marxist parties that it hosts.

In July 1921, 13 delegates representing 57 party members met in conditions of secrecy, in fear of their lives but with great optimism and courage, to found the Communist Party of China. From there to a party of nearly 97 million, from a ruined to a strong and proud nation, is a long march without historical equal.

Next week’s congress is a further and extremely important step on that continuing march towards a fully developed socialist society and the party’s highest goal of communism.