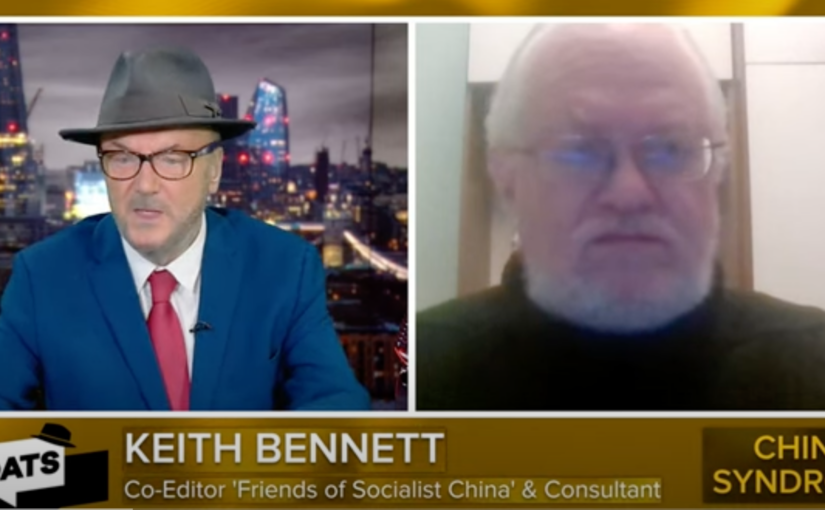 In the video embedded below, FoSC co-editor Keith Bennett discusses with George Galloway the recent decision by the British state to designate China as a security threat. Keith points out that this reflects a foreign policy trajectory in Britain of providing unquestioning support to the US; essentially outsourcing its foreign policy to Washington, which, starting with Obama’s Pivot to Asia and then escalating through the Trump and Biden administrations, seems intent on waging a New Cold War to contain China and suppress its rise.

George and Keith both observe that, just a few years ago, Britain and China were enjoying a ‘golden era’ of relations. Britain under the Cameron-Osborne administration was strongly encouraging trade with, and investment from, China. Indeed, Keith points out that British Steel would have gone out of business had it not been acquired by a Chinese company. At that time, the British government was operating on the (correct) basis that good relations with China were positive for the British economy. The idea that China has suddenly become more aggressive or changed its basic policy orientation is absurd: China isn’t sailing gunboats through the Solent; rather Britain is sailing its warships through the Taiwan Strait and forming a nuclear alliance with Australia and the US. British policy-makers have clearly decided, counter to the interests of the British economy, to join in with the US-led hybrid warfare against China. Nothing good will come of this strategy for the British people.

One thought on “Video: Why has China suddenly become a ‘threat’ to the UK?”