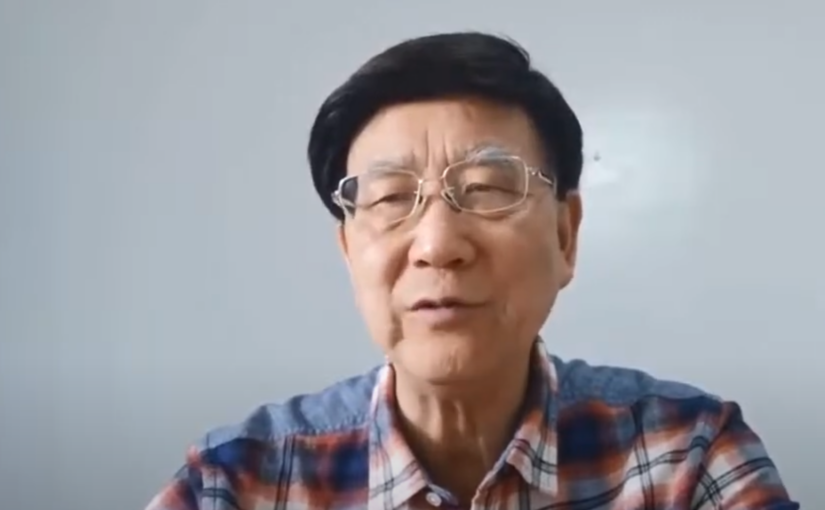 The International Manifesto Group (IMG), a discussion group of academics and activists in which Friends of Socialist China participates, held an online symposium on Sunday October 16 to mark one year since the launch of its manifesto, Through Pluripolarity to Socialism.

Joining an impressive line-up of speakers, Professor Cheng Enfu, a leading academician at the Chinese Academy of Social Sciences (CASS) and President of the World Association of Political Economy (WAPE), lauded the Manifesto for its “clear theme, profound ideas and magnificent momentum” in appraising the past, present and future of socialism.

According to Professor Cheng, the response to Covid and the Ukraine conflict have both served to expose imperialism and led more people in the world to support socialism.

Faced with imperialist aggression, the close relationship between China and Russia objectively constitutes the core of the world progressive forces today, he argues.

According to Professor Cheng, the Soviet Union did not collapse due to any failure of socialism, but rather to the treachery of the Gorbachev and Yeltsin leading groups combined with the long imperialist encirclement.

We are pleased to publish Professor Cheng’s speech below.

In September 2021, I spoke at the launch meeting of the Manifesto: Through Pluripolarity to Socialism. The Manifesto has a clear theme, profound ideas, magnificent momentum, and clearly articulated the history of world socialism, its present status quo and future. The international situation over the past year has continued to confirm the fundamental point of the Manifesto. In the following I would like to share with you a few points of mine on the development of socialism in the world, for the sake of discussion.

First, the severe situation of the Covid-19 pandemic in the West has led more people around the world to realize the advantages of the socialist system and its way of governance. So far Russia has exposed dozens of US biological labs in Ukraine, scientists from various countries have revealed that the coronavirus originated in the United States, and the spokesperson of China’s Foreign Ministry has also raised questions about whether the coronavirus originated in the United States. The United States has evaded all these questions. It is now the third year of the pandemic, and no one knows how long it is going to last. As the Manifesto rightly says, “As ramshackle capitalisms responded to the pandemic inevitably shambolically, matters nosedived. Whether they denied it or falsely pitted lives against livelihoods—the capitalist class’s euphemism for profits—their response to the pandemic amounted to the social murder of millions and induced economic crises of historic proportions.”

More and more people around the world are realizing that the developed capitalist countries in the West are responsible for the pandemic and the high mortality rate. The class position and prejudice of Francis Fukuyama, Joseph Nye, etc. lead them to defend the Western system, claiming that the difference between governments of Western countries such as the US and that of China is only the capacity of governance. Such defense is futile. In contrast to the situation in the West, socialist countries like China, Vietnam, Cuba and the Democratic People’s Republic of Korea follow the human rights principle that prioritizes people’s life and health and have achieved the dual goal of epidemic prevention and control and economic development.

Second, Russia’s special military action triggered by the West has led more people in the world to realize that the socialist system and policies are peaceful in nature. What is the nature of the Russian-Ukrainian War? The first, I think, is that in the Russian-Ukrainian war that is triggered by NATO’s eastward expansion and Ukrainian semi-fascism, Russia represents the forces defending justice through fighting against US and Western hegemony. Second, Russia revealed that the United States had set up dozens of biological labs in Ukraine, and therefore also represents the forces of justice in safeguarding the livelihood of the people through fighting against the United States and the West’s use of biological weapons to endanger the lives and health of the people of the world. Third, Russia opposes Ukraine’s brutal violence against the Russian nationality in Ukraine, and therefore their action assumes the nature of national liberation of Donbass and Luhansk through its support for their independence. Fourthly, the war in an objective sense constitutes a blow to the autocratic regime of the monopoly bourgeoisie in Ukraine that prohibits the dissemination of Marxist and communist ideas and banned the Ukrainian Communist Party. Therefore, the Russian Communist Party and other progressive forces and wise people in the world are supporting the Russian action against US and Western hegemony. This has led more people around the world to realize that “imperialism is war”, as Lenin famously put it, that the US today and NATO are the instigators and proponents of war, while the socialist countries are genuinely peace-loving. A new “strategic concept” was proposed at the NATO summit on June 27th, which was unanimously approved by all 30 NATO countries, while the United States pushed for a revival of NATO’s deterrent function, announcing a nearly eightfold increase in troops on NATO’s eastern flank.

Third, the US and its allies in the West are promoting a hegemonic and unilateral ‘Warm War’ and New Cold War, and this has led more people in the world to support the international progressive forces, as represented by China and Russia, to “team up” and oppose hegemony. The new pattern of international politics today is characteristic of an imperialist alliance in confrontation with Russia and China, with the decline of US hegemony. As President Putin put it, the Russian-Ukrainian conflict ended US-led unilateralism. After Mikhail Gorbachev died on August 30, 2022, the West praised him and attacked Putin and Russia for starting a new cold war. In fact, Gorbachev once said that it was the US and the West that had provoked a new cold war against Russia. Since Biden came to power, the United States has been actively building a trilateral security partnership with Britain and Australia, a “Quadrilateral Security Dialogue” (QUAD) with, Japan, India and Australia, the “Five Eyes Alliance” with the UK, Canada, Australia and New Zealand, and an “Indo-Pacific Economic Framework”. The US and UK plan to transfer weapons-grade nuclear materials to Australia to build nuclear submarines, and a series of nested small circles have been formed on the basis of the G7. Britain has followed the United States closely. The head of Britain’s MI6 stressed that China is now the top priority, even more important than the mission of anti-terrorism. He also used the conflict between Russia and Ukraine to hype Taiwan related matters, making the improper claim that the West should convey to China the so-called ‘terrible consequences that would be caused by China’s military action for unification.’ The British Foreign Minister made a similar point. The late former Japanese Prime Minister Shinzo Abe stressed that Taiwan’s problem would be Japan’s problem, and Japan recently has recently planned to deploy thousands of missiles in the Ryukyu Islands that should have been China’s territory. Therefore, more and more political forces and wise people in the world actively support the idea that the international progressive forces with Sino-Russian relations at their core should play a very positive role, and that an open-ended Sino-Russian cooperative relationship is objectively conducive to the development of world socialism. As the Manifesto right points out, “Today, however, that struggle stands at a perilous juncture. Its long-brewing crisis brought to a boil by the pandemic, manifestly making a poor contrast to China’s manifold successes, the leading imperialist nation seeks to lead other imperialist and lackey countries in a New Cold War against China. . . . Never has so much destructive power been concentrated in so few irresponsible and desperate hands to wield against so great a majority of the world’s people and peoples with an objective interest in socialism.”

Fourth, the outbreak of economic crisis in the West in 2008, the severe pandemic, and the conflict between Russia and Ukraine have accelerated the “rise of the East and fall of the West” in the world economic structure, and this has encouraged more people around the world to support the development of socialist China and the idea of cooperation and development in a community with a shared future for humanity. The new pattern of the international economy today with the rise of the East and fall of the West means that the importance and proportion of the US and Western economies, represented by the G7, have declined, while that of the Eastern and Southern countries, represented by China and other BRICS countries have increased. Based on the exchange rate rather than the purchasing power parity share of RMB, in 1978, China’s share of world GDP was 1.8%, and it reached the lowest point 1.76% in 1990. Since then the share of China’s GDP in the world economy has risen dramatically. In 2021, global GDP amounted to $94.94 trillion, while that of China was $17 trillion, constituting 75% of US GDP, 46% of total GDP in Asia and 18.6% of global GDP. The US had the highest share, with 24.2% of the world, while Japan’s share fell to 5.2%. The gap between China’s GDP and that of the US has narrowed rapidly, and China’s total GDP is expected to overtake that of the US by 2030. Emerging and developing countries’ purchasing power parity share of the global economy has also risen, from roughly the same as that of developed economies before and after the financial crisis to nearly 60% of the total by 2020.

China will continue to work with friendly countries to build the Belt and Road, the Asian Infrastructure Investment Bank (AIIB), the Shanghai Cooperation Organization (SCO), the BRICS, the Group of 77 and the Global Development Initiative, and increase funding for the Global Development Promotion Center of the China International Development Cooperation Agency (CIDCA). This will greatly improve the development of national economy and people’s livelihood in developing countries, including socialist countries.

Fifth, 2022 marks the 100th anniversary of the founding of the Soviet Union, which is worth commemoration and continuous study. As the Manifesto rightly points out, “The magnitude of our tasks requires that we secure the legacy of the Soviet Union and all attempts to build socialism hitherto with a historically just balance sheet of their achievements, limitations and failures.”

The research team of innovative Marxism that I lead just completed a paper that presents the following proposals based on a variety of objective research data and models in and outside China: first, had there been no major losses caused by the invasion of bourgeois German fascists, the comprehensive national power of the Soviet Union before its dissolution would be greater than that of the United States; second, without  the betrayal of the Gorbachev and Yeltsin leadership groups, the comprehensive national power of the Soviet Union today would exceed the United States based on a continuation of both countries’ economic trends. My proposition that the Soviet Union was destroyed by hostile forces at home and abroad rather than experiencing a natural dissolution has been widely accepted in Russia. Both communist leaders and Putin have described the Soviet Union as “being destroyed” in recent speeches. The superiority of socialism over capitalism, represented by China and the Soviet Union, has been proved by facts, while the Soviet Union’s “being destroyed” was the result of both the internal factor of the conscious betrayal of socialism by Gorbachev and other leading groups of the Communist Party of the Soviet Union and the external cause of the long-term encirclement by the capitalist countries of the west.

These are the few points that I want to share with you here today. Thank you very much.

One thought on “Cheng Enfu: The new pattern of international economy and politics is conducive to the development of world socialism”