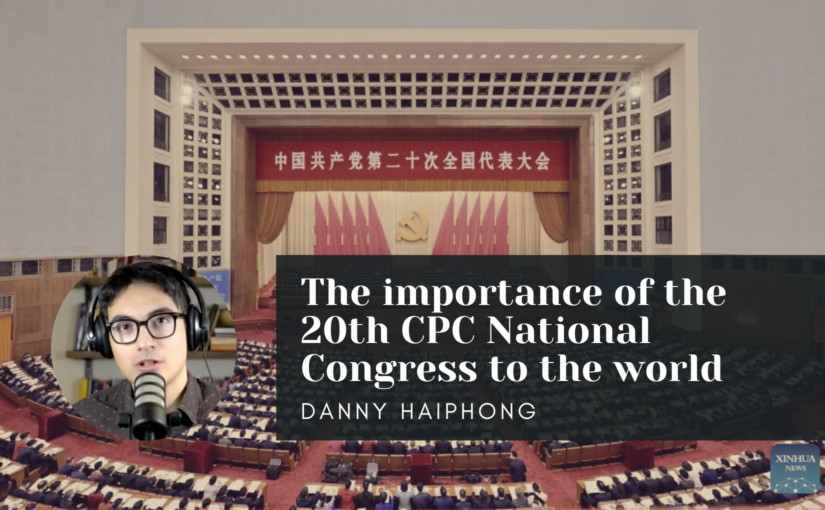 Writing in CGTN, co-editor of FoSC Danny Haiphong analyzes the importance of the ongoing 20th CPC National Congress to the rest of the world. Danny asserts that the CPC’s leadership over China’s socialist modernization process offers inspiration that developing countries seeking a way out of the Western framework of imperial hegemony can draw from.

The 20th National Congress of the Communist Party of China (CPC) began on October 16 and gathered more than 2,200 party delegates to deliberate on the progress of the goals set forth in the 19th Congress and those to be achieved moving forward.

With the opening of the 20th CPC National Congress, Western media attempted to undermine China by spreading innuendos about the country. Such baseless rumors demonstrated the ceaseless attempts of certain countries, namely the U.S. and its European allies, to discredit China’s governance system. Yet no amount of anti-China slander changes the importance of the 20th CPC National Congress to the world.

Contrary to Western media hype, the CPC has already demonstrated a high level of stability that is sorely missing in much of the world. The CPC has proven its legitimacy to the people through concrete actions. China comes into the 20th CPC National Congress having achieved the CPC’s first centenary goal of “Xiaokang,” a moderately prosperous country in all respects, in 2021. The CPC led the way in eradicating extreme poverty in China ahead of schedule and has met recent challenges such as the COVID-19 pandemic and a U.S.-led containment with strength and resolve. The interests of the Chinese people have been safeguarded by the CPC in national development, and the principal of peace has been prioritized by the Party in all aspects of its foreign policy.

In his report to the 20th CPC National Congress, Xi Jinping affirmed that common prosperity for all and material, ethnic, cultural, and ecological advancement are pillars in China’s process of socialization modernization. China will not only pursue economic growth as a whole but also quality growth that reduces inequality, tackles corruption, increases collective prosperity, and restores the ecological integrity of the natural world.

The CPC is therefore pursuing a path that is incredibly important for the future of the entire planet. Indeed, China’s development is deeply connected to the global economy given that the country of 1.4 billion people has the world’s largest manufacturing sector and comprises of over 18.5 percent of global GDP. But the CPC’s pursuit of socialist modernization also provides alternative model of cooperation to nations seeking development without sacrificing sovereignty, stability, and peace.

In his report to the 20th CPC National Congress, Xi stressed that China is offering “a new choice” for humanity to economically advance outside of a unipolar, Western-led framework of colonization, domination, and inequality. He asserted that China stands resolutely against aggression and interference in the sovereignty of other nations.

This means that the benefits of China’s pursuits are shared by all. In an era of unprecedented global challenges, the stability of the CPC’s leadership over a rising China offers much hope for humanity. U.S.-led activities in Ukraine, for example, has brought the world closer to global conflict and has brought with it increased hunger, poverty, and inflation from the impact of counterproductive sanctions against Russia.

Throughout this conflict, the CPC has continued a longstanding policy of opposition to sanctions of any kind and has maintained diplomatic and economic channels critical to creating an environment for peace. Poorer nations in the Global South can thrive from win-win opportunities such as the Belt and Road Initiative, which the World Bank predicts will reduce poverty for nearly 40 million people worldwide through its transport projects alone.

The increased global interest in the CPC’s 20th National Congress is a reflection of a changing world. For decades after World War II, “multi-party democracy” was viewed in a U.S.-dominated global order as the standard for good governance. No more. A stormy winter of economic crisis and militarism is coming for the U.S. and the EU, sharpening the contrast between the U.S.-led unipolar order and China’s model of global cooperation.

Humanity is crying out for real, collective solutions to poverty, climate change, war, and public health crises such as the COVID-19 pandemic and the CPC is charting a path toward these ends that the world can find inspiration from.