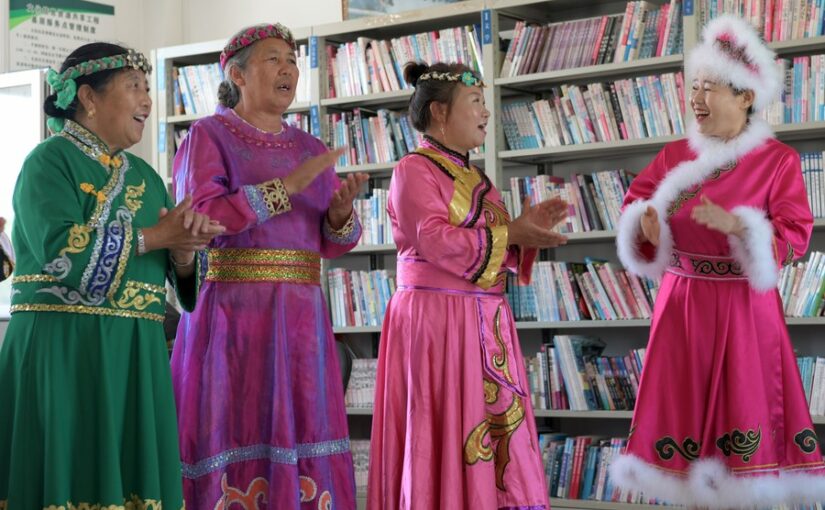 The below article is republished from China Daily. Its particular interest lies in its depiction of the life of the Hezhe people who live in China’s northeastern Heilongjiang province. (The Hezhe people also live in Russia’s Siberia where they are known as Nanai.)

The Hezhe are described as one of the smallest ethnic groups in China. According to the 2020 national census, they numbered just 5,373 people. Yet, despite the despicable calumnies spread about the supposed oppression of minority nationalities in China, rightly derided as the ‘lie of the century’, the fact that even a nationality of just a few thousand people has its national rights, culture and way of life fully guaranteed (including with representation in the National People’s Congress) shows the extensive democracy practiced by China, as with other socialist countries, when it comes to the national question. The contrast with the long history of suppression and oppression practiced over centuries by the British state against the languages and cultures of Ireland, Scotland, Wales, Cornwall and the Isle of Man, by the French state towards Breton, Basque, Corsican and Occitan, and with the genocide of indigenous peoples by settler colonists in the United States, Canada, Australia and New Zealand, or of the Ainu and Ryukyu peoples at the hands of the Japanese state, could scarcely be clearer.

Wearing traditional grand ethnic costumes, You Mingfen and her fellow villagers watched a live broadcast of the 20th National Congress of the Communist Party of China in the early hours of Sunday, the opening day of the ongoing event.

“We were encouraged to hear the achievements mentioned by Xi Jinping and felt proud of the great changes in our hometown in the past decade,” said You, 57, owner of a rural homestay in Bacha village of Bacha Hezhe township in Tongjiang, Heilongjiang province.

“It also resonated with me when he said the Party must ensure and improve the people’s well-being in the course of pursuing development and encourage everyone to work hard together to meet the people’s aspirations for a better life.”

Bacha, a distinctive village with ethnic minority elements, has a population of 513, including 364 Hezhe people.

The Hezhe people are one of the smallest ethnic groups in China, numbering just 5,373, according to the 2020 national census.

They mainly live in several counties by the Songhua, Heilong and Wusuli rivers in Heilongjiang, where they have long depended on fish for survival.

Since 2016, the tourism industry in Bacha village has been booming, with annual per capita income increasing from about 16,100 yuan ($2,200) to 25,600 yuan. The village has received more than 60,000 tourists, bringing its net tourism revenue to 3 million yuan.

Tourists can feast on a variety of fish and buy unique ornaments made from fish skin and bones.

“The Hezhe people are hospitable, and we usually offer the talaha (grilled raw fish) to our distinguished guests,” said You.

“Fresh fish is grilled medium-rare and then cut into thin slices. People eat it dipped in salt,” she said. “The dish can only be made from wild carp.”

The family also has a fishing boat, with which You’s husband can get the freshest wild fish.

You and her husband started their business in 2018 in their two-story house, providing three rooms and distinguished Hezhe catering for guests from across the country.

“The busiest season lasts from May to October, which can bring us more than 50,000 yuan a year,” she said. “In the winter, we can stay in a warm room enjoying the leisure time that was unimaginable before.”

The better life has inspired more young villagers to return to their hometown, including You Hao.

You Hao (not related to You Mingfen), 32, became a civil servant in Tongjiang after graduating from Harbin University of Commerce in 2013.

“I am a Hezhe native born in Bacha, and I was really happy to see the great change in my hometown,” he said. “When I knew the village urgently needed young talent to support the development of its tourism industry, I decided to return in August 2018.”

He was appointed deputy village Party secretary in charge of the establishment and management of the village’s collective tourism company.

“We are striving to improve infrastructure to better serve tourists,” he said. “Tourists can experience the most original rural life and flavor, which has attracted visitors from different cities in the province, as well as from the provinces of Guangdong, Sichuan and Hebei.”

With government support, Bacha made efforts to change its appearance, including renovating roads, greening and installing street lamps. So far, there are 33 homestays and three restaurants in the village.

In 2018, the company attracted an investment of 11 million yuan from a Beijing company for two sightseeing cruises.

“Tourists from all over the country came and stayed here longer,” said You Hao. “Around 200 villagers are directly involved in the tourism industry, bringing them more income.”

In late 2016, a cooperative was founded in the village, focusing on Hezhe ethnic fish-skin artwork, including paintings and various ornaments, and now has attracted 53 members from the village as well as nearby villages.

“We invited experienced folk craftsmen to give lessons to all the members, helping them create unique ornaments as well as pass on our cultural heritage,” said Wang Haizhu, 45, president of the cooperative. “The ornaments are welcomed by tourists, bringing us an annual income of more than 100,000 yuan.”

Wang and her members also tried to promote their ornaments via livestreaming, which also boosted sales volume and cultural promotion.

“We have so much intangible cultural heritage to be proud of,” she said. “It is the responsibility of all Hezhe people to keep the culture booming in future generations.”