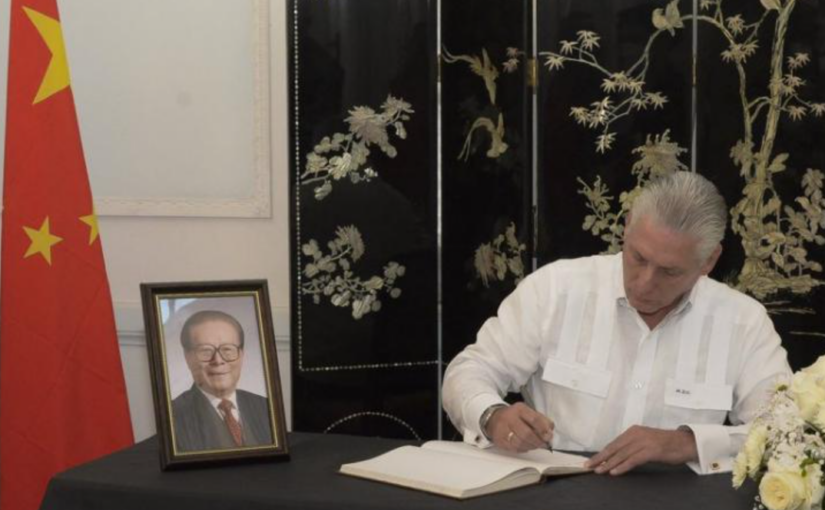 The following report was published in Spanish on 9 December 2022, on the website of the Communist Party of Cuba. It has been translated into English by Friends of Socialist China.

At midday on Friday, during a break in the work session of the Fifth Plenary of the Central Committee of the Communist Party of Cuba, First Secretary and President of the Republic, Miguel Díaz-Canel Bermúdez, arrived at the embassy of the People’s Republic of China in Cuba to sign the book of condolence opened there following the death of Jiang Zemin on 30 November.

“In the name of the Cuban people, Party and Government, we express our heart-felt condolences on the death of former General Secretary and former President Jiang Zemin,” wrote the Cuban dignitary, who on December 1 had decreed an official mourning in the country on the occasion of the death of the Chinese party leader.

He added: “We deeply lament the physical departure of a dear friend of Cuba, a prominent statesman, an outstanding communist and defender of the socialist cause in China and worldwide, whose exceptional political and humanist principles we will never forget.”

After signing the book of condolences – in which the Cuban leader was accompanied by members of the Political Bureau Roberto Morales Ojeda, Organizational Secretary of the Central Committee of the Party, and Bruno Rodríguez Parrilla, Minister of Foreign Affairs – the Chinese Ambassador to Cuba, Ma Hui, thanked Díaz-Canel for the condolences sent after the physical departure of Jiang Zemin, “a great leader of our country who made important contributions to promoting the development of relations between China and Cuba”.

Now, he said, “it is up to us to continue his political legacy and take bilateral relations to new heights”.

In recent days, he stressed, “many people from different sectors of Cuba have also come here to express their condolences”.

The President of the Republic of Cuba acknowledged how much the ties between the two nations had advanced during the period that Jiang Zemin was President of China, as “bilateral relations were strengthened and deepened and important projects of mutual collaboration were initiated for the benefit of both countries”.

Among other joint projects, the dignitary recalled the contribution that Cuba was able to make to China in terms of the training of students, “of young Chinese, in Spanish language and in a range of courses”.

On this occasion, he said, in addition to our condolences, I would also like to express “our gratitude to the General Secretary of the Communist Party of China and President of the People’s Republic of China, Xi Jinping, for all the support he gave us during our recent visit to his country; for his sensitivity and understanding of the situation in Cuba, and for the unconditional support he expressed to help us in the country’s development programs.”

We are eternally grateful, he said, and “we are going to make every effort to continue strengthening our relations, expanding them and, of course, achieving concrete results”.