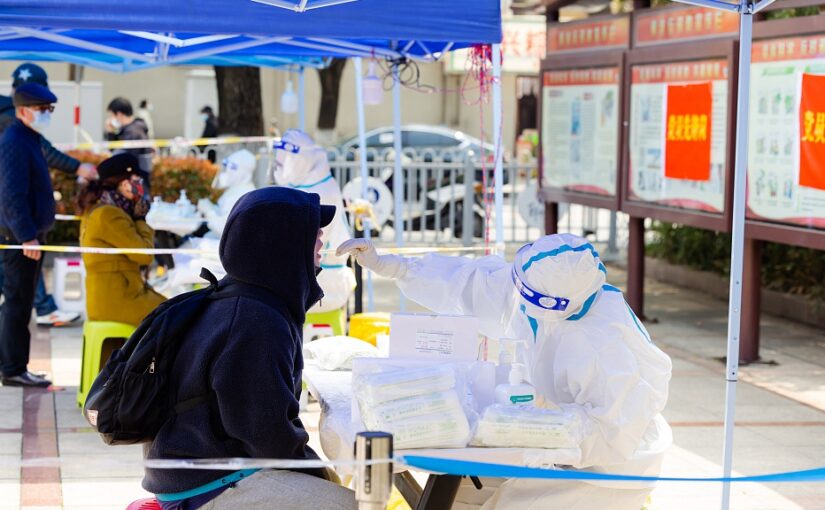 In this timely article, which we reproduce from CGTN, Keith Lamb asks why the major capitalist countries refuse to learn from China’s tackling of Covid-19, “when China’s methods have proven to be among the most successful”. The answers, Lamb observes, highlight “precisely why capitalists should not be given the key to the state apparatus”.

Why are we unable to grasp even the basic lessons from recent history? Overall, looking at COVID-19 responses, China’s methods have proven to be among the most successful. When COVID-19 broke out, swift lockdowns saved millions of lives; grassroots resident groups instantly manned checkpoints in and out of large residential areas, checking temperatures, and apps tracking COVID-19 swiftly followed.

Residents were not cowered into their homes and it wasn’t the humanitarian “hell-scape” made out in the Western press. Even before official restrictions came into place, residents voluntarily isolated en masse. I can say this with confidence because I was in China, not just in one province but three.

When it comes to COVID-19 deaths per million, China’s loss is three, compared to the U.S. at 2,989 and the UK at 2,393. Thus, when it comes to protecting life, the words “horror” hardly applies to China yet, not learning from even recent history, as China now battles new outbreaks of COVID-19, using its “dynamic zero-COVID-19” strategy, this is precisely the sort of language the Western corporate press is using. Even in more measured reporting where language describing China’s strategy as “brutal” and “extreme” is not being used, China’s COVID-19 strategy is predicted to bring economic woes.

What on Earth is going on? Where does the moral authority judging China’s response as “brutal” come from when the death rate for the most “developed” state is nearly 1,000 times greater than China? Then, considering China’s economy continues to make good progress, why predict that China’s previous successful measures to contain COVID-19, which are now implemented again but in a more dynamic manner, will somehow lead to China falling flat?

As a previous share-holder of a small business in Xiamen in Fujian Province, from my personal experience, it is true that when COVID-19 first hit, many businesses came to a halt. However, as China’s efforts proved successful, businesses also bounced back quickly.

No doubt had one simply just put the decision with business owners regarding China’s COVID-19 strategy they, putting profits above the whole of society, might well have opted for similar strategies to the U.S. and the UK who are opting now to “live with COVID-19.”

This point highlights precisely why capitalists should not be given the keys to the state apparatus. Not only are they unable to consider the long-term interests of society in general, where profits override deaths, they are also unable to plan for their long-term future too and end up cannibalizing the host. For example, China bounced back quicker because its long-term measures worked. Thus, the market was revived and capital thrived too, relative to its Western counterparts.

In addition, had China just “lived with COVID-19” and had a similar death rate to the U.S. then up to three million of its citizens would have perished. This would have led to a catastrophe in China; supply lines would have been devastated, and the global market, including Western markets, would have been in a sorry state.

Coming back to the question of this article: Why can’t we learn from China instead of lecturing it? If “we” refers to the general Western populace, then the simple answer is we are highly propagandized by the corporate press who peddle nonsense about China’s “horror quarantine camps.” As such, “we” the people are generally unaware that China has anything to teach “us” about COVID-19 strategies, even when the facts, such as the death rate, are manifestly obvious.

Consequently, those more enlightened need to stop banging their heads pondering why obvious facts aren’t getting through, and start recognizing it for what it is – naked propagandized lies being dressed up as news. Large conglomerates own the Western press; it is not a free media but one monopolized by the oligarchical class. As such, it is their “right,” the short-term interests of monopoly capital over the long-term health interests of society and even the long-term interests of a competitive functioning market that is put forth as “objective” news. It is through this media, as well as the funding of political parties and their close relations with politicians, that they wield control over society.

With this in mind, the corporate press criticism of China has a dual function. Firstly, it disguises their own “failures” when dealing with COVID-19 and it discourages Westerners from seeing anything positive in an alternative system. Of course, considering the ideology of capitalism is that humans are subordinated to capital, whether they consider a high death rate a failure or a successful Darwinian cleansing of those unable to add value to capital is debatable.

Secondly, looking at China’s successful response and its flourishing economy, vis-a-vis Western ones, perhaps the corporate press hope to persuade China to follow a similar “live with COVID-19” strategy, to level out the playing field.

I don’t think China will take the bait. China has proven more than capable of steering its economy through COVID-19 while adjusting its strategy to its needs. It has proven that the economy and the long-term outlook of capital can flourish if they remain subservient to a healthy society.