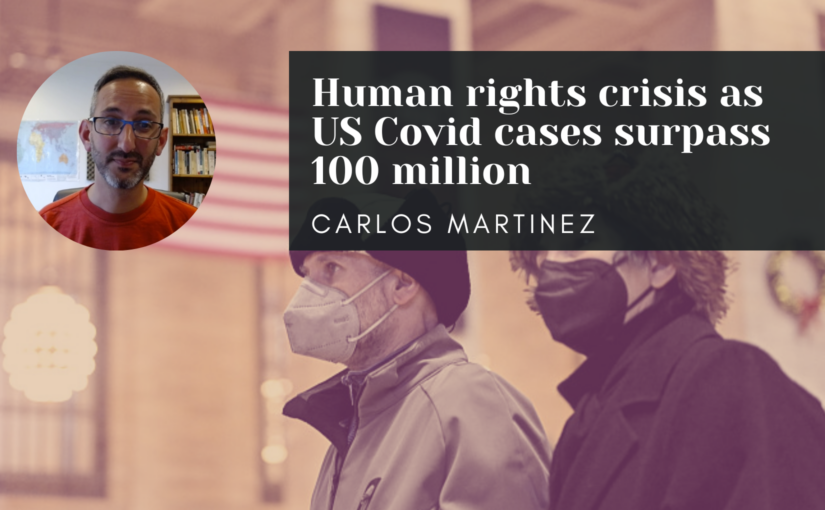 The following article, written by FoSC co-editor Carlos Martinez for CGTN, compares the rising hysteria in the Western media over China’s Covid situation with its near-total silence in relation to the ongoing public health crisis in the US. The US has just surpassed 100 million Covid cases; its Covid death toll exceeds 1 million; and its average life expectancy has dropped to 76.4 years – the lowest since 1999. What’s more, as a result of centuries of systemic racism, the impact of this crisis is multiplied for the black, Latino and indigenous population. The media prefers to sensationalize the wave of Covid cases in China – as a form of deflection and diversion, and as part of the generalized campaign of China-bashing. People should be awake to this tactic, and refuse to be fooled by it.

While the United States is failing to provide global leadership in such areas as ecological protection and the pursuit of peace, it has established itself as something of a COVID-19 trailblazer, with by far the highest number of COVID-19 cases and deaths.

This week, according to data from Johns Hopkins University, the total number of confirmed COVID-19 cases in the U.S. surpassed 100 million. Somewhat surprisingly, this milestone received precious little attention in the Western media, which appears to be far more interested in the evolving COVID-19 situation in China. A Washington Post editorial on December 20 went so far as to claim that “China’s new COVID nightmare could become a global catastrophe.”

Any sentient being would be hard pressed to miss the hypocrisy. The corporate media in the West has, for the last three years, loudly denounced China’s dynamic zero-COVID policy, labeling it as “authoritarian” and “unsustainable.” Now that China’s health authorities have adjusted the strategy in accordance with changing circumstances – the far lower pathogenicity of the dominant Omicron strain, the high level of vaccination, and the improved understanding of how to effectively treat symptoms – all of a sudden U.S. journalists and politicians are concerned for the people of China.

As the veteran Chicago-based education specialist and campaigner Michael Klonsky points out: “The common thread running through all these media stories is that the imperialist mind in the West knows what’s best for China’s health and wealth and has that country’s best interests at heart.”

China’s record dealing with the pandemic speaks for itself. Its policies have saved millions of lives. With 18 percent of the global population, China has suffered 0.08 percent of all deaths from the virus. If the U.S. had matched China’s performance in terms of preventing death from COVID-19, its pandemic body count would currently stand at thousands rather than a million. Thus China has performed a thousand times better than the U.S. It is clear that the Chinese government and health authorities will continue to make extraordinary efforts to protect people’s lives and livelihoods.

If American journalists and politicians are genuinely concerned with public health and human rights – as opposed to simply hurling Cold War slander at China – they would do well to turn their attention to their own country. U.S. President Biden announced three months ago that “the pandemic is over.” But for the families of the approximately 1,088,218 people in the U.S. that have died from COVID-19, or the millions currently suffering with Long COVID, the pandemic is very much not over.

COVID-19 has exposed and exacerbated a terrible human rights crisis in the U.S. Life expectancy had been static for over a decade, with unacceptably high death rates driven by, among other things, a raging opioid epidemic and a deeply unjust healthcare system in which close to 30 million people are denied access to even basic medical services.

With the rapid spread of COVID-19, life expectancy took a major dive. According to data newly released by the Centers for Disease Control, U.S. life expectancy is now 76.4 years – its lowest since 1999. And the effects of this crisis are distributed highly unevenly. In 2020, life expectancy for African-Americans fell by more than three years. It is now down to 70.8, which means that black people in the U.S. live on average 5.6 years less than their white counterparts. Meanwhile, according to the National Center for Health Statistics, average life expectancy for indigenous Americans decreased by a full four years in 2020.

This disparity cannot be blamed on the pandemic. Viruses do not discriminate on the basis of subcutaneous melanin. Black people, Latinos and indigenous Americans have suffered particularly badly under COVID-19 because they are much more likely to suffer chronic poverty, to live in crowded housing, to have had to continue working during lockdowns, and to lack access to healthcare. Such is the manifestation of systematic, structural racism in the United States; the continuing unaddressed legacy of slavery, genocide, colonization and apartheid. This structural racism is evident throughout society: in health indicators, in educational outcomes, in economic outcomes, in the system of mass incarceration.

The uncomfortable truth is that the working class and oppressed communities in the U.S. are experiencing a chronic human rights crisis, brought on by a profoundly undemocratic political and economic system centered around the needs of a wealthy elite. Ordinary people in the U.S. should not allow themselves to be fooled by the media’s incessant deflection and diversion, which so often takes the form of China-bashing.