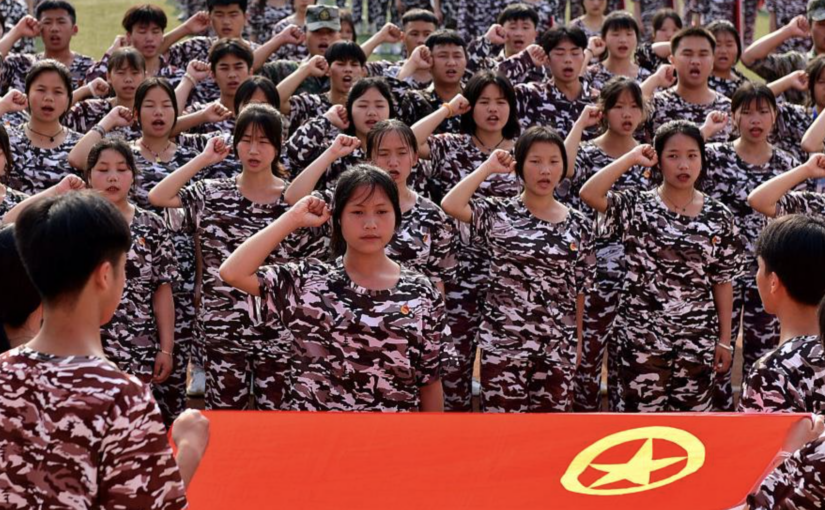 We are pleased to publish here the text of a speech by Ms Li Na, Communist Youth League branch secretary of Bureau VII of the International Department of the Communist Party of China (IDCPC), given on 17 December at the second of two online seminars on the theme ‘The 20th National Congress of the Communist Party of China and its World Significance’, organised jointly by Friends of Socialist China and IDCPC.

Li Na’s speech gave a fascinating insight into the workings of the Communist Youth League at a branch level, including the league’s role in organizing study of Marxist theory and recruiting young members – “as the Party’s development needs new blood.”

I am Li Na from the Bureau for North American, Oceanian and Nordic Affairs of IDCPC. I am very honored and grateful to have this opportunity to speak here with you all.

The successful convocation of the 20th CPC National Congress marks a milestone in our Party’s history, as the whole Party and the entire nation embark on a new journey toward building a modern socialist country in all respects, and advance toward the Second Centenary Goal. As one of the youngest Party member of our Bureau’s Party branch and the Secretary of the Communist Youth League branch of our Bureau, today I want to share with you the CPC’s operation at primary-level and the Party’s youth work basing on our own practice.

As is pointed out in the Report to the 20th CPC National Congress, “the Party’s advantage and strength lie in its close-knit organizational system”. As world’s largest political party of government with over 96 million members, the CPC attaches great importance to strengthening its over 4 million primary-level Party organizations, including those in Party and government offices and public institutions. Today I want to focus on 3 major functions of primary-level CPC organization, taking our Bureau’s Party branch as an example.

Second, the Party branch organizes theoretical study in various forms to make sure that all of its members are well aware of the Marxist theories and the latest theoretical exploration and policy addresses of the Party leadership. For instance, recently our Party branch has held general meetings to study the 4th volume of Xi Jinping: Governance of China upon its publication, as well as General Secretary Xi Jinping’s address at the opening session of the 20th National Party Congress and the Report to the Congress. Besides, our branch organizes tours and visits to museum, exhibitions and institutions at least once a month. Recently we’ve visited the former residence of Li Dazhao, a founding member of the CPC who sacrificed his life for the revolution in 1920s. This month we also visited the exhibition “Forging Ahead in the New Era” at Beijing Exhibition Hall, which showcases China’s great achievements in the new era under the leadership of General Secretary Xi Jinping. These activities have helped us broaden our horizons and learn more about the history and achievements of our Party.

Third, primary-level Party organizations are responsible for member recruitment, as the Party’s development needs new blood. It takes at least 2 years for an applicant to be granted full Party membership. After handing in a formal application letter to the Party organization, the candidate needs to undergo a strict procedure of training and tests. When the candidate is finally qualified to join the Party, the branch holds a general meeting for admission in which the candidate takes a solemn oath and becomes a probationary Party member. At the latest oath-taking ceremony of our Comrade Xin Yuzhou in September, all members of our branch renewed our oath together with him. With the standard and innovative operation of our primary-level Party organizations, the CPC continues to grow bigger and stronger.

As you may know, people of my age are known as Generation Z. The Generation Z in China is indeed a very lucky generation, for we are born in a remarkable time of peaceful development and we grew up along with a strong and prosperous China. We are presented with incomparably broad stages to display our talents and bright prospects to fulfill our dreams.

General Secretary Xi Jinping pointed out on the 20th CPC National Congress that “work concerning young people should be regarded as a matter of strategic significance”. Under the guidance of his instructions and the leadership of our Party branch, our Bureau’s Communist Youth League branch is committed to provide various platforms for young cadres under age 28 to exchange views and improve ourselves. We have a Marxist theory study group, an English study group and a reading club that hold activities on a weekly or monthly basis. Recently we have had workshops on Marxist classics including Communist Manifesto, Mao Zedong’s On Contradiction and On Practice, etc. which was greatly helpful for enriching our minds.

A lucky generation is also supposed to be a generation with historical responsibilities. We will always bear in mind General Secretary Xi Jinping’s words that we should steadfastly follow the Party and its guidance and strive to be a generation with ideals, sense of responsibility, grit and dedication to make our contribution to building China into a modern socialist country in all respects. We are also more than happy to compare notes with dear friends from the UK every so often and learn more about each other. Thank you.

2 thoughts on “On the work of young communists in China”