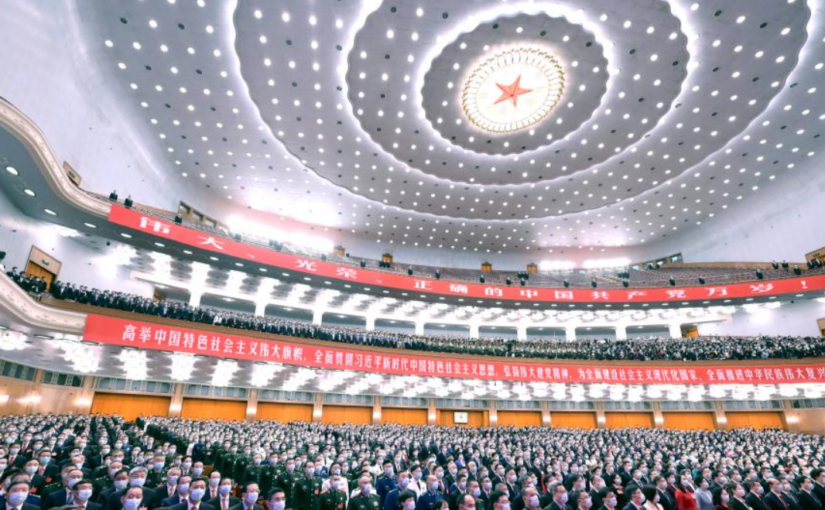 We are pleased to publish the text of a speech by Eben Williams, a Glasgow-based member of the International Committee of the Young Communist League (Britain), given on 17 December at the second of two online seminars on the theme ‘The 20th National Congress of the Communist Party of China and its World Significance’, organised jointly by Friends of Socialist China and IDCPC.

Eben discusses the significance of the 20th Congress, in particular its relevance to young communists in Britain, contrasting Xi Jinping’s work report with the political pronouncements of Britain’s political leaders. The work of the CPC Congress reflects a profound orientation towards, and dedication to, meeting the needs of the masses of the people. The CPC’s adherence to the mass line couldn’t be more different to British parliamentary politics under the dictatorship of capital.

Eben calls on the progressive movement in Britain to learn from China’s experiences, to tell the truth about China, to take inspiration from the achievements of the Chinese people, to unite with Chinese people in the global struggle against imperialism, and to “redouble our efforts to strengthen the anti-capitalist and anti-imperialist resistance here at home.”

First of all, a warm hello to our comrades from the International Department of the Communist Party of China and a big thank you to Carlos and Keith and all of our comrades at Friends of Socialist China for the invitation to join this important discussion on the 20th National Congress of the Communist Party of China and its world significance. I hope to give a few of my own thoughts from watching the congress, the perspective of young communists in Britain that have grown up watching the rise of China, and a small call to practical action.

As communists, our work is obviously very broad, and we do all kinds of different things to help build power for the working class where we live, but one of the areas of our work that I’m most interested in is our work building relationships with other working class and communist organisations around the world through our membership of the World Federation of Democratic Youth and through our International Department. This includes both the Communist Party of China and its youth wing, the Communist Youth League.

Recently, comrades from the CYL invited us to watch the opening ceremony of the 20th National Congress online, together with them and other comrades from around the world. Many of our members are inspired by the Chinese socialist project and this was an exciting opportunity to say the least, like staying up until 3am to watch some kind of communist Superbowl of historic importance.

I was astounded by the scale of it, with more than 2,200 party delegates, representing over 96 million party members, representing over 1.4 billion Chinese citizens, all gathering together at the Great Hall of the People in Beijing to chart out the country’s future in one of the most advanced democratic exercises in the world.

I was moved by the Party’s commitment to ceremony and to its history, honouring the fallen martyrs of the revolution in a minute’s silence, including comrades Mao Zedong, Zhou Enlai, Liu Shaoqi, Deng Xiaoping, Zhu De, and Chen Yun.

But mostly, I was impressed with the care and precision put into the report from the outgoing committee delivered by General Secretary Xi Jinping in his opening address. I learned that this report took painstaking efforts and many, many months to prepare, and the contrast to speeches given by our own political leaders here in Britain couldn’t be starker, and reveals core differences between our two countries.

For example, China’s ruling class will always stress unity, because, in the language of the Party, China is a “people’s democratic dictatorship under the leadership of the working class based on an alliance of workers and farmers.” In China, the will of the majority forms the basis of the Communist Party’s mandate to govern, whereas Britain’s ruling class survives by sowing division and turning us against each other. Fundamentally, this is because it is a dictatorship of capital that does not have that same mandate and class basis.

Where our politicians will work hard to conceal their intentions and, where possible, only make them intelligible to the tiny, privileged elite at the highest echelons of our society who benefit, the rest of us will fumble in the dark. Many of us will become conscious of being lied to by our leaders, but instead of uniting against them, we will fall into political apathy, escapism, dead-end philosophies for our liberation, or even the clutches of the far-right. Meanwhile, a fierce anti-communist agenda works to prevent us from finding real solutions.

In total contrast to this, China’s leaders aim for clarity, ensuring that all citizens, regardless of education or background, are able to understand where China has come from, where it is now, and where it is going. How does China aim to improve the lives of the masses? What are the barriers it faces and how will it overcome them? The answers given in the outgoing report and produced during the Congress will now be studied and analysed by Party cadres in cadre schools and discussion groups throughout the country, so that they can perform their work better. Meanwhile, the media will work to make these complicated political strategies intelligible to the masses through TV and radio programmes and newspaper articles, right down to bitesize infographics on social media and Marxist education apps on your phone. Anyone seeking to understand the most powerful communist government and socialist country in the world (and people from across the political spectrum must surely want to do this) must also dedicate themselves to studying and understanding the impact of the 20th National Congress, the meaning behind President Xi’s speech, and the theoretical basis of Socialism with Chinese Characteristics.

The YCL are no exception, with our members often raising questions about China’s socialist road. We therefore have a responsibility to educate our members so that they can go on to tell China’s story to more working-class people here in Britain, and help rebuild the defence against this new wave of McCarthyism and the US-led “New Cold War”. I myself joined the YCL partly because of what I saw as a much more credible view of China compared to other organisations and parties on the Left. Indeed, the so-called “crimes” of China seem to be the only thing that all of these other different groups can agree on.

It’s worth mentioning that our membership is all aged between 12 and 29, which means that it is entirely made up of people born after the dissolution of the Soviet Union in 1991. We are the generation born after “the end of history” when capitalist hegemony seemed eternal and any viable alternatives seemed on the brink of collapse. There are therefore comrades who watch the National Congress and see China as taking up the mantle of a new Soviet Union, a new socialist superpower capable of challenging US imperialism and offering hope to working class people around the world that live under capitalist oppression.

Although there are parallels, China is, of course, not the Soviet Union. And despite the West’s high hopes and best efforts, China has not taken the same path towards dissolution, nor has opening up to capital allowed it to succumb to capitalist restoration. Instead, it has survived into the 21st century to hold its 20th Congress, to celebrate its many achievements over the past 5 years, such as achieving its First Centennial Goal and eliminating absolute poverty, and China is now well on the way to becoming a powerful country with countless achievements for humanity closely allied with the Global South and other socialist nations.

The Chinese government is deeply aware of the lessons learned from the Soviet Union so that it can avoid the same fate, and is therefore extremely self-critical of its work. As a point of improvement in the opening report, President Xi raises concerns of serious internal issues facing the Party of ten years ago, including what he calls “deeply shocking cases of corruption.” An honest assessment of these contradictions can only come from a position of revolutionary conviction, and Xi Jinping’s presidency has been defined by the Party leadership’s commitment to resolving them, waging a fierce battle against corruption that has struck down “both tigers and flies”, and ushering in a “new development philosophy” for the “New Era”, which places high quality and balanced development and tackling inequality alongside economic growth as vital priorities for the country. The YCL can only commend these efforts.

China may not be the Soviet Union, but it is much, much further removed from a country like the United States. As President Xi highlighted in his speech, China is proud to carve out a new path of development and “will not tread the old path of war, colonization, and plunder taken by some countries,” stating clearly that “[t]hat brutal and blood-stained path of enrichment at the expense of others caused great suffering for the people of developing countries.” China will therefore follow its own path of peace, self-reliance, and win-win cooperation.

So, as socialists, communists, and progressives here in the imperial centre, in countries that took that other path of development, what story should we tell about China when talking to our friends and our neighbours?

First and foremost, we must tell the truth, prioritising exposing the lies told by the capitalist media, but also letting the facts of China’s achievements speak for themselves without falling into the trap of arguing that China can do no wrong. We are materialists, not idealists, and we need only “seek truth from facts” to succeed in articulating how the China miracle has been a victory for socialism and Marxism-Leninism.

Secondly, our research into China’s journey must always be used primarily to inform the hard work to be done here at home. Our working class is suffering from a full-scale offensive from our oppressors, including a cost-of-profits crisis and an assault on trade union and protest rights, but it’s also fighting back with the biggest surge of trade union activity that has been seen for many years, and an escalating militancy which cannot go to waste. China’s achievements show us that it is through action, through throwing ourselves into working-class struggle in trade unions, tenant unions, and communities, through escalating their struggles, and through doing the hard work of building a militant and revolutionary Communist Party that’s fit to lead, that we too can follow the socialist road. As friends of China living in an imperialist country, the best way for us to show solidarity to our comrades abroad is by redoubling our efforts to strengthen the anti-capitalist and anti-imperialist resistance here at home.

So, to the young people who are aware of the devastating impacts of capitalism on our planet, who are ground down by the barbaric actions that capitalists are taking in our country, but who have not yet taken the necessary steps to fight back, we must remember: nobody is coming to save us, so we must learn from China’s example of self-reliance and train to become examples ourselves.

Thank you very much.

One thought on “Telling the truth about China, and learning from China’s example”