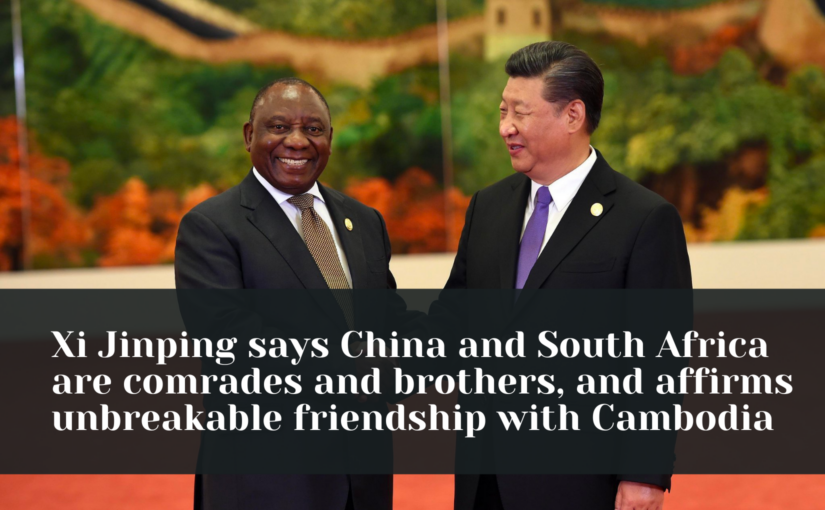 Whilst international media coverage understandably focused on President Xi Jinping’s March 18 telephone conversation with US President Biden, the Chinese leader also held two other important conversations that day with leaders of countries that have particularly friendly relations with China.

Speaking with South African President Cyril Ramaphosa, Xi said that their two countries “share a special friendly relationship of comrades and brothers”. This phrase is particularly significant – whilst it has been used several times by the Chinese leadership to describe their ties with South Africa, it is highly unusual, if not unique, for China to describe its state relations with a non-socialist country as embracing comradeship. In this context, it is worth noting that the friendship between the Communist Party of China and the African National Congress of South Africa date back to at least 1953, when Nelson Mandela sent ANC Secretary General Walter Sisulu to China to gain support for the steadily building anti-apartheid struggle, following Sisulu’s participation in the fourth World Festival of Youth and Students in Romania. China consistently supported the South African people’s struggle against apartheid and for national liberation.

President Xi further said that the relationship with South Africa is of great significance both for China/Africa relations as well as solidarity and cooperation among developing countries. The two leaders also exchanged views on the development of the BRICS grouping, which links Brazil, Russia, India, China and South Africa, and which China chairs this year. They noted that their two countries share a very close position on the conflict in Ukraine, standing for dialogue and negotiation. There have been a number of suggestions that South Africa could play an important role in this regard. Clearly alluding to the US pressures that both countries are facing, the two leaders agreed that sovereign countries are entitled to independently decide on their own positions.

The same day, President Xi also spoke with Cambodian Prime Minister Samdech Techo Hun Sen, with a key focus being their bilateral Belt and Road Cooperation. Xi stressed that China would pay particular attention to developing roads and education in Cambodia’s rural areas so as to help develop agriculture and lift farmers out of poverty. Noting that next year will see the 65th anniversary of their diplomatic relations, President Xi said that their ties had become even more unbreakable whilst Prime Minister Hun Sen described the two countries as true ironclad brothers. Discussion also centred on the prospects for the Regional Comprehensive Economic Partnership (RCEP), to which both belong, and relations between China and ASEAN, a ten-country bloc of South East Asian nations that Cambodia chairs this year.

Xi made the remarks during his phone conversation with South African President Cyril Ramaphosa.

Noting that China and South Africa share a special friendly relationship of comrades and brothers, Xi said consolidating and developing their relations is of great significance to guiding China-Africa relations as well as solidarity and cooperation among developing countries.

The two sides should continue to firmly support each other on issues concerning each other’s core interests and major concerns, step up efforts to implement the nine programs of the Forum on China-Africa Cooperation and the 10-year strategic plan on cooperation between the two countries, and strive for new achievements in bilateral cooperation in various areas, Xi said.

China is ready to discuss cooperation on vaccine production with South Africa, and support South Africa and other African countries in their fight against the COVID-19 pandemic, Xi said.

Xi noted that China, which chairs the BRICS this year, is ready to work with South Africa to maintain the development momentum of the BRICS cooperation mechanism, build a high-quality partnership that is more comprehensive, closer, more pragmatic and inclusive, realize the development of member countries and promote stronger, green and healthy global development.

China stands ready to work with all parties to uphold true multilateralism, safeguard international equity and justice, and safeguard the legitimate rights and common interests of emerging economies and developing countries, so as to actively contribute to the steady recovery of the world economy and the building of a community with a shared future for mankind, Xi said.

Ramaphosa said he would like to extend once again his wishes to the centennial of the Communist Party of China and congratulate China on the successful Beijing Winter Olympics and Paralympics.

South Africa firmly adheres to the one-China policy and steadfastly supports China’s stance on the issue related to Tibet and other major issues, Ramaphosa said.

Ramaphosa said South Africa supports China in carrying out the work as the BRICS chair this year and looks forward to a successful BRICS summit this year.

The two leaders also exchanged views over the situation in Ukraine. Both sides agree that China and South Africa share a very close position on the Ukrainian issue, and that sovereign countries are entitled to independently decide on their own positions.

Both sides support Russia and Ukraine in keeping the momentum of peace talks and settling disputes through dialogue and negotiations.

The two leaders said they are ready to strengthen communication and coordination over the issue.

The two sides should engage in high-quality joint Belt and Road construction, speed up the construction of major projects such as highways, airports and special economic zones, and expand cooperation in emerging fields such as finance and digital economy, Xi said.

Xi noted that with the joint efforts of both sides, China-Cambodia relations have withstood tests and grown even more unbreakable.

Facing major global changes and the pandemic, both unseen in a century, China and Cambodia have firmly promoted the building of a community with a shared future, setting an example of forging a new type of international relations, he said.

The Regional Comprehensive Economic Partnership and the China-Cambodia free trade agreement should be fully tapped to push bilateral trade to a new level, Xi said.

The Chinese side will import more high-quality agricultural products from Cambodia, carry out more cooperation with Cambodia to improve people’s welfare, and implement such projects related to roads and education in rural areas, so as to help develop agriculture in Cambodia and lift farmers out of poverty, he noted.

China will continue to support Cambodia in its fight against the COVID-19 pandemic and explore new models of people-to-people and cultural exchanges with Cambodia against the backdrop of the pandemic.

Xi stressed that China firmly supports the central role of the Association of Southeast Asian Nations (ASEAN) in the regional cooperation architecture, and supports the bloc in playing a bigger role in regional and international affairs.

China also supports Cambodia in carrying out its duty as the rotating president of ASEAN this year, Xi said, adding that China stands ready to work with Cambodia and other ASEAN countries to push for the continuous development of the China-ASEAN comprehensive strategic partnership.

The prime minister said he believes that under the strong leadership of President Xi, China will make more great achievements.

The rapid growth of Cambodia-China bilateral trade and smooth progress of major projects under the framework of jointly building the Belt and Road have demonstrated the achievements of their comprehensive strategic cooperative partnership and the building of a Cambodia-China community with a shared future, Hun Sen said, adding that it shows Cambodia and China are true ironclad brothers.

Cambodia firmly adheres to the one-China policy and firmly supports China’s position on issues related to Taiwan and Xinjiang, he noted.

The Cambodian side is ready to take the 65th anniversary of the establishment of diplomatic ties between the two countries next year as an opportunity to deepen exchanges and cooperation in economy and trade, agriculture, as well as people-to-people and cultural exchanges and other fields, and advance the Belt and Road cooperation, so as to lift the Cambodia-China comprehensive strategic cooperative partnership to a new level.

Hun Sen thanked China for providing material supplies, vaccines and other assistance to Cambodia in its fight against COVID-19, expressing his hope for stronger anti-pandemic cooperation.

As the rotating chair of ASEAN this year, Cambodia will continue to actively promote the development of ASEAN-China relations, he added.

The two leaders also exchanged views on the situation in Ukraine. The two sides agree to uphold a balanced and fair position and make positive efforts to promote peace talks.

One thought on “Xi Jinping says China and South Africa are comrades and brothers, and affirms unbreakable friendship with Cambodia”